More than 45 KFOR vehicles entered the north of Kosovo and Metohija on Thursday morning, just before 10:00 hours. 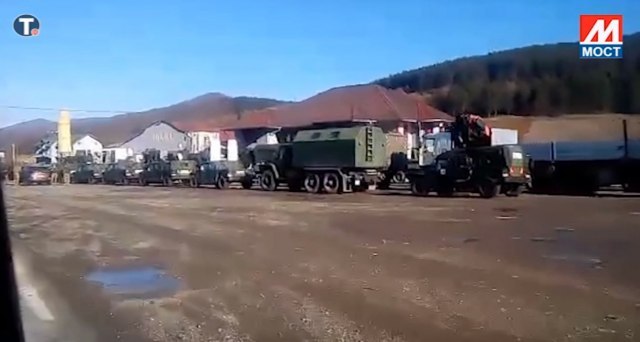 They were moving in a convoy and, according to the information from the field, are heading towards the town of Leposavic, Tanjug said.

In addition to combat vehicles, they also carry equipment for blockades and making barriers, such as construction machines, excavators, and wire.

The KFOR movement toward the north come at an already tense time after the moves Pristina has been making past the EU, and especially ahead of its intention to decide tomorrow on the formation of a Kosovo army, with the open support of the western centers of political and military power.

Commander of NATO joint forces in Naples, US Admiral James Foggo, said yesterday that the formation of an army was something Pristina is deciding on "sovereignly."

"In this context, the presence of KFOR in the north, especially the composition and the equipment of the vehicles, indicates fears about Serbia's possible reaction," Tanjug noted.

Later in the day, KFOR spokesperson Vincenzo Grasso told RTS that this activity was "part of regular exercises."

"There are other convoys moving in other parts of Kosovo. In accordance with (UN Security Council) Resolution 1244, KFOR troops practice their readiness to be quickly deployed throughout Kosovo," Grasso said.

He also denied Tanjug's report that KFOR vehicles were carrying equipment meant to be used to "block the border."

"The situation is under control, as you can see it has been for the past several weeks, and this now is merely a regular exercise in all of Kosovo, with the goal of fulfilling KFOR's mandate, and that is to preserve peace," Grasso told the website KoSSev.