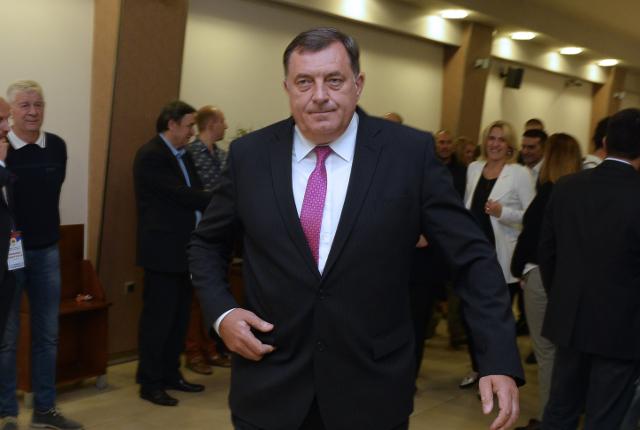 Instead, the leader of the Serb entity (RS) in Bosnia said, he would agree to be questioned "in any other justice institution in the area of the RS."

Dodik remarked that after Bosniak (Bosnian Muslim) member of the Presidency of Bosnia-Herzegovina Bakir Izetbegovic threatened he would "end up like Gaddafi, Saddam, or Milosevic," he did not wish to "risk his life" by traveling to Sarajevo.

Dodik explained that he took Izetbegovic's threat - to which Serbian President Tomislav Nikolic has also reacted - as "a message to all extremist groups in Bosnia-Herzegovina, and a call to liquidate him."

RS President Milorad Dodik has been summoned to the Prosecution of Bosnia-Herzegovina and should appear there on October 3.

Local elections are scheduled to be held in Bosnia-Herzegovina a day before, on October 2.

This is what EuroBlic reported earlier on Tuesday, noting that the prosecution wants to question Dodik in connection to the RS Day referendum, held on Sunday.

Meanwhile, Security Minister of Bosnia-Herzegovina Dragan Mektic says he thinks this means Prosecution of Bosnia-Herzegovina's chief prosecutor, Goran Salihovic, is now "directly taking part in the election campaign in the RS" - and "to the benefit of Dodik, by turning him into a victim before the voters."

Mektic comes from the SDS party, which is in opposition in the Serb entity (RS), where Dodik and his SNSD are in power.

"Since various interpretations of my statements regarding this case have appeared, I stress that I have been against any kind of questioning of RS officials because of their failure to implement the decisions of the Constitutional Court of Bosnia-Herzegovina," Mektic said, and added:

"This is a selective approach of the Prosecution of Bosnia-Herzegovina. Following this logic, many others should have been arrested first, such as Dragan Covic and Bakir Izetbegovic, who have for years failed to implement the decision of the the Constitutional Court of Bosnia-Herzegovina regarding elections in Mostar."