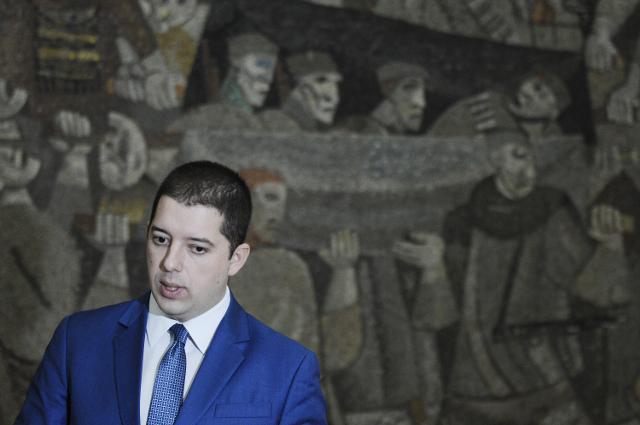 Djuric said those Bosniak (Muslim) politicians (in Bosnia-Herzegovina) see dialogue as "nothing but the continuation of war by other means."

Djuric told Tanjug that "all communication should cease with Mayor of Srebrenica Camil Durakovic, and with Chairman of the Presidency of Bosnia-Herzegovina Bakir Izetbegovic, because Sarajevo is behind the behavior of Durakovic and his chauvinist rampage."

Earlier on Wednesday, Durakovic said that Serbia's EUR 5 million donation to Srebrenica was made "to all peoples, not just Bosniaks" in the municipality, and that he "hoped that Vucic did not think the donation would get him free access to the Memorial Center."

Earlier in the week, Durakovic announced that top Serbian officials were unwelcome at the upcoming Srebrenica commemoration. Beta reported that while speaking on Wednesday, "Durakovic would not give a concrete answer when asked whether he was ready to return the donation."

In his reaction, Djuric said that Serbia "cannot silently stand by and watch Sarajevo trample on and humiliate not only the interests of Serbia, but the entire Serbian nation, literally trampling on and humiliating the Serbian people in the Serb Republic."

"Of course this is being done in a premeditated manner by official Sarajevo and behind this is none other than Bakir Izetbegovic and his surroundings, incapable of any policy except that of war and conflict," said Djuric.

The Serbian official added that these Bosniak politicians see Vucic's offered hand as "an opportunity to spit on it, insult the Serbian people, call for continued war by other means, because to them, dialogue is nothing but the continuation of war by other means."

"Therefore, with such people as Izetbegovic and Durakovic, there is and there can be no a conversation," said Djuric, who also announced that he would ask for an urgent meeting of the SNS Presidency.

As he pointed out, "the Serbian people are truly endangered by such attitudes of some politicians in the region, and this is not only about Izetbegovic, Durakovic, and the Bosniak chauvinist elite, but also many others." Djuric added that this danger also stems from "international circumstances."

"I think that as a party we should not remain silent at this humiliation of the Serbian people and Serbia, and even less so take part in it. We have no right to participate in it, and therefore it is necessary to stop this practice and react in a way that is appropriate and proportionate," said Djuric.

Outgoing Serbian Foreign Minister Ivica Dacic said that Srebrenica Mayor Camil Durakovic was attacking Serbian Premier-designate Aleksandar Vucic over his visit to Srebrenica and the Serbian cabinet providing a donation to the municipality, and doing it in league with the chairperson of the Presidency of Bosnia-Herzegovina, Bakir Izetbegovic.

Dacic denounced Durakovic's statement that he hoped "Vucic wasn't thinking the donation would get him a subscription to enter the Memorial Center" as shameful.

"Obviously there are politicians who cannot survive without conflict and who don't want to build a better future, but to drive wedges from the past deeper. Instead of answering who tried to murder the Serbian prime minister in Srebrenica and why, Durakovic, in league with Izetbegovic, is attacking Prime Minister Vucic for even coming to Srebrenica and because the Serbian cabinet sent a donation to the municipality. The whole world commended these decisions by Serbia and Prime Minister Vucic, except those who want to continue their warmongering rhetoric," Dacic said.

He also wondered whether "anyone other than the Serbian parliament will condemn crimes against another people."

"The desire for reconciliation and stability isn't our weakness, it is the strength and advantage of Serbia and its government," Dacic added.