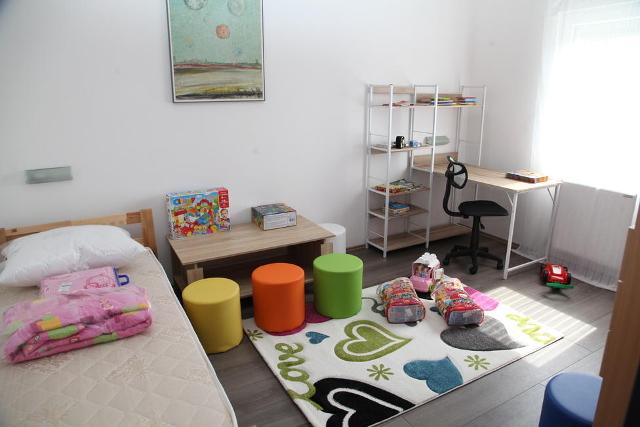 The house was built with resources provided by Fond B92, the District Public Prosecution of Sremska Mitrovica, the Provincial Secretariat for Gender Equality of the Government of Vojvodina and the City of Sremska Mitrovica. The total investment is worth about RSD 25 million.

The Safe House in Sremska Mitrovica will accommodate women survivors of violence in this city and other municipalities in the Srem District. The facility covers 300 square meters and has 20 beds, safety equipment, quality appliances and furniture, and generally meets the highest standards of social protection of this type.

According to the Center for Social Work in Sremska Mitrovica, violence against women continues to grow each year. According to official data of this institution there were 200 registered cases of domestic violence in 2015, and consequently a great need for a temporary facility for emergency care for women and their children.

Security equipment was purchased with a donation from the AVON company, appliances were provided by Gorenje, while Tefal and Julius Meinl helped by donating come of the dishes. Dexy Co. provided toys for children while publishing houses Samizdat, Laguna and Kreativni Centar donated books. The house is decorated with paintings of inmates of the Administration of the Penal Sanctions, created during the process of occupational therapy.

Addressing the ceremony, Veran Matic expressed satisfaction that the capacity to protect women who are survivors of violence in Serbia has been enriched by another important building.

"This is our seventh safe house, we built two in Belgrade and one in Zrenjanin, Sombor, Pancevo and Vranje each. It is particularly important that we cover slowly one by one district in Vojvodina - this is the fourth, and a shelter in Kikinda remains to be built, and to ascertain the situation in Subotica, so that this phase of activity of building a network of safe houses in the province is finalized. This creates conditions for other programs that we have in the meantime started, and which are designed for economic empowerment of women at risk or those who are survivors of violence - Onasnazivanje - to receive a far wider character than what is currently taking place in the safe house in Sombor."

"No one can remain silent if they see violence in the family, because one in two women and one in six children in Serbia are victims of domestic violence. Safe houses are important, but they are only a part of the solution," said Bojan Pajtic and added that it is extremely important to implement some of the legislative proposals which unfortunately have not accepted by the Assembly of Serbia, such as the proposal to remove the perpetrator from the family, instead of the victim, and the proposal to strip the perpetrator of their right to possess arms.

Miroslav Vasin said that with the opening of the Safe House in Sremska Mitrovica all districts in Vojvodina are covered by the safe houses, which is in line with European standards, and noted that when it comes to employment of the women who leave the shelters, the Provincial Government will bear the cost of a year's worth of costs of salaries and contributions that would have been paid employers who employ women victims of violence.

Vasin added that the provincial government is successfully implemented a program to prevent domestic violence, which includes all educational, social and health institutions, judicial authorities and police authorities into the system of protection from violence.

The Safe House in Sremska Mitrovica will be handed over to the socal center for social welfare in mid-April when it will be officially opened.