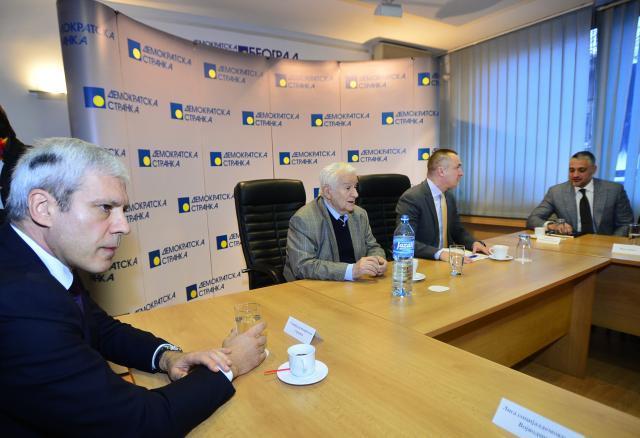 "Citizens of Serbia are not interested in the number of mandates, nor in who will join whom in a coalition. They are interested in vital things and these elections are a matter of Serbia's survival," he said.

Earlier on Monday, the events unfolded in a way similar to what happened during the weekend, when it was reported that an agreement had been reached by the three parties to form a joint list dubbed "Democratic Serbia" - only for this to be refuted a short time later.

Before Pajtic made his statement today, LDP presidency member Kenan Hajdarevic said that this party, the DS and the SDS had reached an agreement on the distribution of mandates on the election list.

"Final agreement regarding mandates," he tweeted, and added that LDP leader Cedomir Jovanovic "cut the agony short during the negotiations and sacrificed the LDP so that the DS and the SDS could get the percentages they asked for."

As things stand now the DS will most likely join forces with the New Party (NS), whose leader Zoran Zivkovic commented on the DS-SDS-LDP negotiations by saying that "rotten compromises never brought with them anything good."

SDS leader Boris Tadic said during the weekend that Monday was the deadline for the parties to reach an agreement. After the meeting today, he told B92 only that "we will be informed about everything in time."

Speaking for B92 on Monday afternoon, DS official Dragoljub Micunovic said that the three parties during the meeting earlier in the day "agreed only not to hamper each another" while failing to form an alliance that would see them take part in the election together. The Democrats, the party's first president revealed, consider participation "in two columns" to be "politically more profitable."