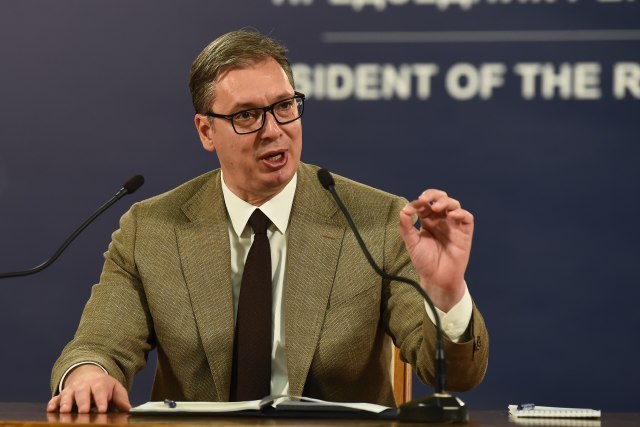 Those requests were brought to Belgrade by the EU special envoy Miroslav Lajcak, with whom Vucic met tonight in the building of the General Secretariat of the President of the Republic.

President of Serbia, Aleksandar Vučić, said that as of today, we have a complete change in the situation in our country, as well as in the territory of Kosovo and Metohija.

President said that the situation in the Western Balkans had changed completely.

"We are always ready for dialogue, while some others have never been ready for a substantive conversation and have the support of Western powers," he said.

“They had the full support of Great Britain, Germany and the other Quint countries", Vucic said.

"They made two decisions in their temporary institutions. One is about banning ID cards from entering the province, and the other is a decision with the sole goal of expelling Serbs from the north, creating a new Storm, and campaigning for years to force Serbs to accept their license plates", he said.

“They have taken two decisions: one denying the right of entry with personal ID cards where they introduce papers to allow entry. The second decision is aimed at expelling the Serbs from the north of Kosovo, creating a new Storm where they want to convince the Serbs in the space of two months to register with RKS Albanian license plates. They will probably hand out leaflets, pamphlets, you know how it was done in the Second World War, and if they don’t convince them, they will confiscate their license plates and vehicles”, Vucic said.

The president says that the authorities of the false state are counting on the Serbs to leave the north, and that Serbia has been suffering lies from the West and Pristina for years.

"They burned dozens of our churches and monasteries and killed dozens of people, and as a reward they got an independent Kosovo, while they were arguing over armchairs in Belgrade," said Vucic.

He also reminds of the difficult decisions of the International Court of Justice due to some stupid issues.

Vučić added that they then decided to harass us with taxes for several years, to demolish CEFTA, and then for special forces with long pipes to invade the north.

"Then they remembered that they should continue to carry out terror, and they started talking about reciprocity. And that's where we come to the greatest hypocrisy of the West. Before the elections, they said, 'Don't worry, we're working on it.' "They counted on me being defeated in the elections. But of course it should also show our people down there that they cannot have Serbia. The most brutal facts are that they are not interested in international public law, and I told Miroslav Lajcak all this, from A to Z," he said.

The president says that when it comes to Ukraine, everyone's mouths are full of territorial integrity, and when Resolution 1244 is mentioned, many look into the distance as if they do not understand what it is about.

"It is clear here that there is no dialogue and talks. There will be many problems. We will always try to preserve peace, but others do not want that, not only Albanians from Kosovo, but also their mentors," Vucic said.

"That resolution also envisages the return of Serbian forces to Kosovo. And now let me ask when that will be. This is happening because they are arrogant, and we do not have nuclear weapons or oil, so they can do whatever they want to us. Our people, and I talked to the representatives of the Serbian List, they will not tolerate it anymore. They will not tolerate incursions by their special units. They have given a deadline, and Pristina is planning a general attack on northern Kosovo on October 1. And the people should know that," he added.

Vučić points out that Americans are the least arrogant in relation to the countries of Quint.

"You have countless examples where they think they can humiliate us. I just decided to say it's okay, I've been suffering and listening to lies for 10 years, pretending to be stupider than I am. But I can't take it anymore that you think you're smarter. Okay, you're using bare force now, so let's see how much it can do. Just know that you're not that smart, and especially don't tell us about law and justice," he said.

The president says that there is no more talk of dialogue here, and that Serbia will look to preserve peace.

"You know, they say that Kosovo is an independent state for them. And I ask where it says that, in which UN act. Why don't you end the dialogue and carry out terror to the end, and finish the job. And what is the difference between separatism and law? When Albanians are asking for something, it is the right to self-determination, and when Serbs are asking for it, then it is separatism. And now I am waiting for those who will start saying that I am saying this on Russian orders. Just stop," Vucic said.

Vučić states that the essence is that the West allows itself to be able to do everything that comes to their mind, claiming that everything is based on the law although this has nothing to do with law, let alone with justice.

"There is no offer on the table. They are looking for Serbs who will go against their people in Kosovo and Metohija, and they have always found only individuals. Our answer will be sober, but deadly and true. We will not take military action, but I beg them not to steal property from our people, and try to expel them. We ask you, powerful and strong. And I believe that they have enough time until September 30 to think three times whether they will do it or not", Vucic pointed out.

"I think this is the sharpest press conference ever, but I emptied myself and held it with a smile," the president said.

"With this conference, I just went down in history because I told them everything. And now I'm going to continue this nice conversation with Lajcak," he added. While answering journalists' questions, President once again asked that no one attack Serbs in Kosovo. "Kurti dreams that he is the new Zelensky, sometimes he dreams that he is Hegel. I am not interested in his nonsense. I am not worried about him, but those who push him into everything. My message is addressed to them. He is irrelevant here in every sense," Vucic said.

Vučić said that in case nothing is adopted, he does not think that we have any other weapon than the truth.

"We will beg them and I believe that someone will be smart to answer our requests. And to allow new Storms and Flash, I said that eight years ago, you will not watch that movie. We should all be worried, things are only getting worse. They are trying to end the Kosovo problem, so that Putin does not give them five Kosovo republics DNR, LNR, Crimea, Kherson... I will not keep quiet. The government will be formed soon, so they can be silent and make a different decision. The same goes for the Parliament. I will not pretend that everything is in accordance with international law. I better not be there," he said. Vučić said that this was a warning request, since he did not know what else he would do.

"Please, stop, people. And let me just tell you, we also have the fifth country that withdrew the recognition of Kosovo, and I'm waiting for them to start applying for membership, so we'll show documents. And we will continue our work. We won't make it easy for them, that's why we are looking for an honest relationship. We will not allow Serbia to be forced and thrown down a cliff", President Vučić concluded.

Just to recall, the institutions in Pristina made a decision to ban Serbian ID cards and after September 30 to cancel the validity of license plates with the names of Serbian cities "KM", "GL", "PR", "UR" and others, with the announcement that after that deadline, these vehicles will be confiscated.

The director of the Office for Kosovo and Metohija, Petar Petković, also reacted, saying that the decision of the institutions in Pristina represents a direct blow to all Serbs, both south and especially north of the Ibar river.

"It is inadmissible for representatives of the international community to remain silent and pretend to be inapt to this threat of conflict and retaliation, while Albin Kurti prepares for the beginning of a great conflict and an attack on Serbs for the end of September, caused by a new one-sided act of the authorities in Pristina", Petkovic concluded.