BELGRADE -- Today, President of Serbia, Aleksandar Vučić, hosted the Patriarch of Serbia, Porfirije, and bishops of the Serbian Orthodox Church.

BELGRADE -- Today, President of Serbia, Aleksandar Vučić, hosted the Patriarch of Serbia, Porfirije, and bishops of the Serbian Orthodox Church. 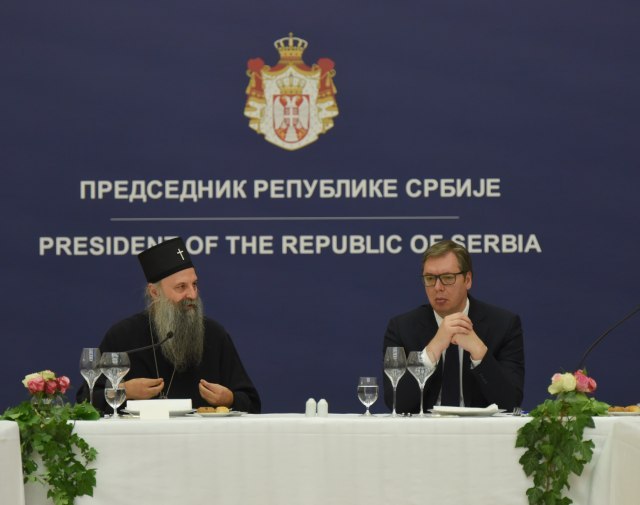 Church dignitaries gathered at this year's regular Council of Bishops of the Serbian Orthodox Church.

The meeting was held in the building of the General Secretariat of the President of the Republic.

"Your Holiness, you who are sitting in the place of Saint Sava, I want to thank you for the attention you pay to the Serbian people. Today, more than ever, we need only peace, not only here but for all humanity," Vucic said.

He said that, due to the position he is in, he sees better than ever that Serbia is in a more difficult situation than six months ago and that "serious hail clouds have hung over Serbia".

"I have talked to many statesmen, and they are all announcing an even more difficult situation in the world than before World War II. We are doing everything we can to prepare for such a scenario. We have enough electricity and gas. Pressures will be fiercer, especially when Putin said how he assesses his operation in Ukraine", said Vučić and added that the leaders of the West used that for exerting stronger pressure.

"And it will be increasingly difficult to preserve our interests because the pressures will be the fiercest. Since the day when the President of Russia said on what he bases his invasion of Ukraine in the formal-legal and political sense, all Western powers have been working to resolving the Kosovo-Metohija knot quickly," Vucic said.

"Of course, the Russians have found their mistakes from the past and they use it for their own needs, logical behavior, for us it is all just an additional burden and additional torment," Vucic pointed out. As he said, he has never seen so much pressure on one country.

"We are the only country in Europe that has not imposed sanctions on Russia at the moment, and that is why we are under enormous pressure, which is causing us problems, these problems are not small and will be bigger," Vucic said, adding:

"I have never seen or dreamed of experiencing this in my life. I have never seen such pressure, we face hysteria and no one wants to hear, let alone listen. Unprecedented hysteria, diplomacy no longer exists," he said.

Porfirije: We pray for peace

Serbian Patriarch Porfirije agreed with President Vučić that the situation in the world is difficult and that the Church's position is always a prayer.

"From our point of view, the conflict in Ukraine is a conflict of value systems, a conflict of civilizations, a conflict that puts us in a position to have an attitude. Our attitude, the attitude of the church is a prayer to God for peace," said Patriarch Porfirije.

Patriarch pointed out that they were praying for peace to come to all the people of the world, to the territory of Ukraine, for the language of weapons to be stopped as soon as possible, and for conversation and dialogue to begin. He thanked the President for everything he does from his position, as well as for trying to make this crisis as mild as possible for the citizens of Serbia.

"There are our believers in every country in the world, and as far as we are concerned, we are trying to help our people," said the Serbian patriarch.