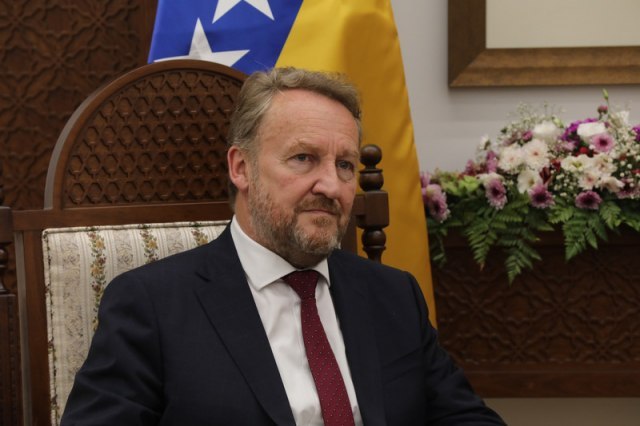 According to the local media, they should discuss the possibility of unblocking the work of this body and scheduling a session after almost three and a half months.

None of the delegates is optimistic that the "informal coffee break", as Bakir Izetbegović, the leader of the SDA, called this meeting, will unblock BiH institutions, especially the House of Peoples of BiH, which has not been in session since July, due to the decision of Republika Srpska representatives not to participate in the work of Bosnia-Herzegovina's institutions and decision-making due to the decision of the former High Representative in BiH Valentin Inzko to make amendments to the BiH Criminal Code which, among other things, prohibits the denial of genocide.

Namely, Bakir Izetbegović, who is also the chairman of the House of Peoples of BiH, and Dragan Čović, the first deputy speaker of this house, announced a meeting of three members of the Collegium for coffee on Monday, during which they would discuss the possible unblocking of this institution.

The "Nezavisne" portal tried to find out whether the third member of the Collegium, Nikola Spiric from the SNSD, would accept the invitation to coffee, but that official did not respond to the invitations of journalists. In recent months, by the way, the representatives of the authorities in Bosnia-Herzegovina are further and further away from the agreement, and it seems that they are competing in who will say harsher words and how they will distance themselves from each other as much as possible, states that portal.

Dušanka Majkić (SNSD), a delegate in the House of Peoples of BiH, told "Nezavisne novine" that coffee has a special meaning in our areas, but in a country where there is such a crisis, when three representatives of political parties go for coffee, it can mean a lot.

Marina Pendeš (HDZ BiH), a delegate in the House of Peoples of BiH, told "Nezavisne novine" that she would not comment, because, as she said, Covic and Izetbegovic had already said that they would talk. "HDZ and Covic have never been a problem," Pendes said briefly.

Munib Jusufović (SBB), a delegate in the House of Peoples of BiH, told "Nezavisne novine" that he would not predict anything. "This is crazy, who knows. Tactics are being tried and something is being done, but no one is backing down, everyone is making moves out of spite, causing resentment with other parties. They should find the way to initiate the discussion, but as no one wants to fail, I don't know what will come of it," says Jusufović.

He adds that this drama must end, but how, he points out, he does not know. Amir Fazlić (SDA), a delegate in the House of Peoples of BiH, expressed his expectation for "Nezavisne novine" that the blockades would end. "I think that the blockade of institutions only causes damage to the citizens who elected this government. Work can bring progress to everyone," Fazlic said.

The last session of the House of Peoples of Bosnia-Herzegovina was held on July 1 this year, and the announced session, which was supposed to be held on July 29, was postponed.

A number of legal proposals are awaiting the adoption of this house, including the budget of Bosnia-Herzegovina's institutions for this year.