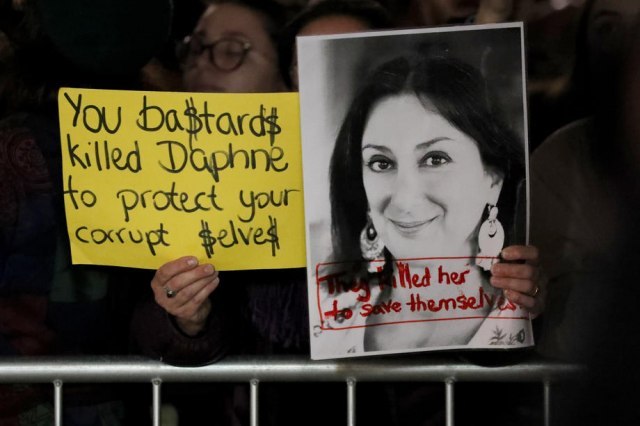 Months before her murder in 2017, Maltese journalist Daphne Caruana Galizia was on the trail of an offshore company called 17 Black Limited.

She did not know who the owner of the company registered in the United Arab Emirates was, but she was sure that it was established in order to channel corruption payments to the leaders of her country, she wrote in her blog, without citing evidence.

Caruana Galizia was killed in a bomb blast in her car in October 2017, Reuters writes.

Last year, the police accused one of the richest Maltese entrepreneurs, Jorgen Fenech, who Reuters has already established that he is the owner of the company 17 Black, for the murder of a journalist. He denied the crime. Her assassination sparked a political crisis in Malta, which forced Prime Minister Joseph Muscat to step down earlier this year. The activities of 17 Black have remained shrouded in secrecy, but new evidence revealed by Reuters and the daily Times of Malta sheds light on the company's business through one specific deal.

The trail of money leads to Montenegro

In December 2015, 17 Black made a hitherto unreported profit of 4.6 million euros, when the Maltese state energy company Enemalta bought a wind farm in Montenegro. The transaction followed negotiations and several trips to Montenegro by then-Maltese Energy Minister Konrad Mizzi.

That same month, Mizzi's accountants and Prime Minister Keith Chambery's chief of staff wrote in an email that Chambery and Mizzi should receive a payment of 17 Black for services that are not specified. Reuters and other media previously reported on those emails, which were part of the request to open bank accounts for a Panamanian company owned by the two of them.

Chambery confirmed to Reuters in April 2018 that the companies whose owner had developed a business plan with 17 Black, which was not implemented, but did not reveal details. He is now under investigation for potential involvement in the murder of Caruana Galizia, police said. Chambery denies having played any role in her murder. Mizzi has previously stated that he did not participate, nor did he know anything about the conspiracy to kill Caruana Galizia.

He told Reuters that he was not affiliated with 17 Black and denied that "his accountant's email states that he could profit from the company". Asked about traveling to Montenegro, Mizzi said: "I participated in this project as the minister in charge of Enemalta and the entire energy policy." He added that it had nothing to do with any corruption.

The Montenegrin wind farm Mozura project was launched in 2010 as the first step of this Balkan country into renewable energy sources. The concession for the construction and management of the wind farm was awarded to the Spanish company Fersa renovables SA, which in the meantime merged with another Spanish company, Audax renovables.

In November 2015, the Maltese government announced that the state-owned company Enemalta would buy the project. Documents published by Fersa and Montenegrin business books reveal, however, that Fersa sold 99 percent of its Mozura ownership to a broker, a Seychelles-based company called Cifidex Ltd. The remaining one per cent of the shares, held by a local Montenegrin company, were also sold to Cifidex.

According to public records, Cifidex bought the shares of Mozura on December 10, 2015 for 2.9 million euros. Two weeks later, Cifidex sold the shares to Enemalta. According to Enemalta's business books, Cifidex Ltd. was paid 10.3m euros, three times the original price.

The ownership of Cifidex, as well as any profit it has made and any additional fees it has made for concluding this deal are not listed in the publicly available documents. Reuters has not even been able to establish how or why Cifidex was involved in this sale. No one in the company was available for comment.

Audax declined to disclose to Reuters any details of Cifidex's ownership or agent, writing in a statement that "it cannot disclose any personal information about individuals." Audax explained that it sold the wind farm because "it was not strategic." Even the Montenegrin company with one percent ownership did not want to comment on this deal. Enemalta said it would answer questions as soon as possible after "gathering and verifying information". Until the publication of this article, Enemalta did not provide any additional details on the purchase and sale of the wind farm.

How the transaction took place

Sources involved in the transaction told Reuters how it went. Cifidex bought shares from Fersa with three million euros borrowed from 17 Black. After Cifidex sold the shares to Enemalti, it returned 17 million euros to 17 Black and paid an additional 4.6 million euros in "profit share", sources claim. Reuters could not determine what 17 Black did with its share of the profits.

Two other people with access to 17 Black's bank account information in Dubai confirmed to Reuters that 17 Black paid three million euros to Cifidex in late November 2015. In May of the following year, Cifidex paid a total of 7.8 million euros to 17 Black. A third source states that the payments amounted to 7.6 million euros.

One person familiar with the situation claims that the owner of Cifidex is Turab Musayev, the director of SOCAR Trading, the Swiss subsidiary of the Azerbaijani state oil company SOCAR. Musayev, a British citizen, is a business partner of Fenech, the owner of 17 Black. The two were the directors of the consortium that built a gas power plant in Malta in 2017, worth 450 million euros. Musayev represented SOCAR Trading, which held a third of the consortium, according to publicly available data.

"As you can guess, our client knew nothing, did not suspect anything, and had no reason to believe that Mr. Fenech was in any way involved in the crime," Thomson wrote in a letter to Reuters.

The letter also states that "any business that our client has with him includes a detailed analysis by reputable and established companies and bankers, professional auditors and lawyers."

Cifidex has its own independent management, the letter said. It contains no allegations of Musayev's ownership of Cifidex or answers to questions about his role in the sale of Mozura. The second letter makes it clear that apart from the transaction with Mozur, Musayev "had no other business with Mr. Fenech".

Fenech, who was charged with complicity in the killing last year, has pleaded not guilty. The court hearings are part of a compilation of evidence against him.

Fenech is in jail while the murder hearings continue and did not answer questions about the wind farm that were addressed to him through his lawyers. One of the lawyers said that Fenech does not want to comment on that for now.

SOCAR Trading told Reuters that it was not involved or knew anything about the Mozura project, nor did it have any knowledge of 17 Black. The company said in a statement that it had hired Musayev as a consultant, "allowing him to operate outside of official duties." SOCAR has confirmed that it has appointed Musayev as the director of a consortium for the power plant project, on which he has collaborated with Fenech.

Reuters asked Chambery, Mizzi and former Prime Minister Muscat if they knew that Musayev, 17 Black or Fenech were connected on the wind farm project. Mizzi and Muscat replied that they were not aware of that. Chambery did not answer. Muscat opened the completed wind farm in November 2019, just before he left office as prime minister, and said in a statement:

"My role was to nurture relations with the Montenegrin government at the presidential and prime ministerial levels, which was my duty as Prime Minister of Malta." He also said that, as far as he knows, Chambery was not involved in the negotiations on the project, Reuters concludes.