BELGRADE -- Serbian President and SNS leader, Aleksandar Vucic, assessed that the opposition have no results despite their presence in the media

BELGRADE -- Serbian President and SNS leader, Aleksandar Vucic, assessed that the opposition have no results despite their presence in the media 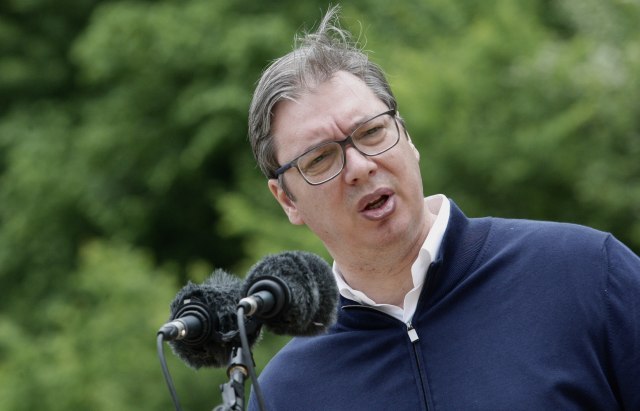 "I don't think the media has ever been more open in any campaign so far. People have the opportunity to see everything. Today, I am hosted at your TV as president and I have no intention of talking about political opponents. Interestingly, some had higher ratings until they appeared on RTS and Pink. It all comes to this - 'I came to tell you that the people in the ruling party are awful…' And when they are asked what is the main problem of our country, they say the media", Vucic said while being hosted on TV Pink.

He said that they are not interested in the future of our children, parents, how the Kosovo problem will be solved, whether our economy will move forward, they only worry of "how they will appear on television".

Referring to the words of Sulejman Ugljanin, Vucic said that Serbia is a country of equal citizens in which all nations have the same rights. "I don't understand Sulejman Ugljanin's nervousness, I speak from the state's point of view. Serbia is a country of equal citizens. Since there is no official chair in Belgrade, he is annoyed, and he is just worried that he doesn't worry us. His politics and politics of hatred cannot bring success as people in Tutin and Novi Pazar just want to live better".

Whatever happens tomorrow, when you go on the Belgrade-Novi Sad-Subotica railway to Greece to the sea ... you will always see the roads, thanks to the reforms that we have implemented, Vucic pointed out.

Vucic said that Serbia lacks real political life and added that breaking into the Public Service Building with a saw or forcibly entering the Assembly is not politics, but violence.

He said that people, young people, have started returning to our country.

"Cacak is becoming the hub of all roads for western Serbia," he pointed out.

He stated that he thinks that it is enough for people to see the results.

"Maybe I am, some would say, you are too long in this position. I do not have the energy to talk about them. We have so many problems regarding Kosovo and Metohija and we work hard in the economic field that I do not have the strength to deal with them."

On the fact that Pyrrhic victoryis predicted in Croatia, he says that there is a coordinated campaign against him in the media, but that he is happy about it.

"They have something else as a problem. Look at the Eurostat report, Serbia is the country with the highest growth in this quarter in Europe. How will they explain that in such a failed Serbia, Vucic has a three times higher growth rate. In the text I read at 5.30 this morning, there is no consistency. These are people who said that the coup would overthrow Vucic, now they say that Vucic will win overwhelmingly ... They are looking to see if something worse will happen to Serbia, so that they would still be ahead in the region".

He points out that we want good relations with Croatia.

People must know one thing, he said - we must believe in Serbs, because that is how we have succeeded in everything we have done so far.

Commenting on the banned video with the girl, he says that it was a very nice video and did not offend anyone, but it bothered them probably because people liked it.

"There was no abuse of children, because we did not run any negative campaign. We talked about the problems that children have, the opening of kindergartens and schools. When I go to open a kindergarten and school, who do I see? We were silent on the ban, we did not say a word."

Whenever something should be forbidden to the SNS, it should always be banned, and not to others, said Vucic.

"The essence is how to forbid me to appear somewhere. They look at the research and say we would do everything easily, but Vucic is our main problem."

We have seen the different stance between the USA, Richard Grenell and Brussels on Kosovo issue, we have seen talk about deadlines, are there any pressures to solve this issue, Vucic was asked, to which he answers:

"We have managed to raise Serbia's reputation in the world for the past seven or eight years. It seems to me that the number of foreign and direct investments speaks for itself. I will not talk about the visits of the presidents of China, Japan and many people to our country".

He pointed out that he would not speak ill of Angela Merkel, although everyone would speak ill of her in the coming months. It will not change its position on Kosovo and Metohija, which is different from ours, but that does not mean that it has no other quality.

"I have no doubt that everything we think about Kosovo, Germany thinks the opposite."

He notes that the largest German investments are in Serbia.

"With Germany alone, there is a total of 13 percent of trade, we are not talking about the EU."

"The only reason I can't sleep is Kosovo and Metohija, and I want to tell the people that I will fight."

Except for Drecun, who studied it in a serious way, no one in Serbia read Resolution 1244 and added that there were quarrels around it, that parts that spoke about sovereignty were taken out.

"In the preamble, we committed ourselves that Kosovo and Metohija will be the subject of the Hague tribunal. Nobody told that to the people," Vucic emphasized, adding that it should be borne in mind that Article two talks about violence in FR Yugoslavia, not KLA crimes.

Vucic said that Articles 10 and 11 establish an international presence and Interim Pristina authorities.

The Albanian side insisted on this ... Resolution 1244 is a complex document, which first satisfied Russia's interests so that Serbia would not completely capitulate on the issue of Kosmet - Vucic stated.

As he says, the situation in Kosovo-Metohija is still difficult today, and Serbia is still fighting well.

"I want to say this (about Resolution 1244) because I can't listen to more fabrications in our public, it's like sticking our heads in the sand," Vucic said, Pink reports.

According to him, in the pre-election show on the Public Service, everyone act united because the only thing that mattered to them was to be against Vucic, and not to say something that is good for Serbia.

"Those who tell me that I will betray Kosovo, I fought more for Kosovo and Metohija and our people there than all of them together in previous years," Vucic pointed out and added that Serbia had invested tens of millions of euros in health care in Kosovo and Metohija.

Vucic said that the people are rational and aware of everything, and that it is not the kibitzers and critics who win, but those who are willing to work.

Vucic said that the only compromises that can be made are those that are in the interest of the country.

"We have one problem now, tomorrow we will say whether we will hold a rally in Novi Sad on Friday, but we have to be careful, I would not want to endanger people's health in any way. I see that there is a desire of people to show what has been done in previous years. We expect about 30.000 people at the rally, and tomorrow we will make a decision on that," Vucic said, adding that it was very important to go to the polls.