BELGRADE -- "I will propose difficult measures - curfew from 5 pm to 5 am in the morning, due to the lack of discipline", President Aleksandar Vucic said

BELGRADE -- "I will propose difficult measures - curfew from 5 pm to 5 am in the morning, due to the lack of discipline", President Aleksandar Vucic said 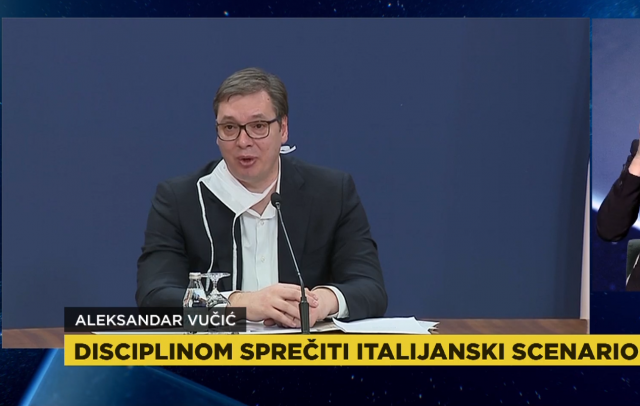 There will be a curfew 24/7 starting on Tuesday if we do not comply with these measures, the President said.

"On Monday, it will be from 2 pm, from Tuesday curfew will last 24 hours," he added.

"As of tomorrow there are no parks, there is nothing. If that is not enough, if there are large number of people on the street again, the curfew will be from 7 am to 1 pm", he said.

"Don't make us impose 24 hours curfew. No one in the world has introduced it, but I will," Vucic said.

President also pointed out the large number of casualties in Italy, where 793 people died today, and urged people to prevent that scenario in Serbia.

"Eight hundred people died in one day, is that normal? And out of those 800, let me tell you, 500 of them in Lombardy, which is the size of Serbia," Vucic said.

President also referred to the number of respirators available.

“We were able to provide many respirators, more free respirators than we had 15 days ago. I am proud of that", President says.

"It is our responsibility to provide respirators, so that we do not decide, as in Italy, who to turn off the respirator on the basis of whether one is younger or older," he added.

He also announced that the plane, returning from China with humanitarian aid, would return to China for another cargo.

"There are more goods in our stores than in all the countries of Western Europe and the US," he said, urging citizens not to rush to stores.

He noted that he expects more and more respirators every day.

"In proportion to the population, we have more respirators than all developed countries, excluding Germany," Vucic said.

He also said that "many talk bad about the competence of our doctors".

He also addressed the problem of a large number of returning Serb nationals from abroad.

"As of March 5, nearly 318,000 people have entered Serbia. Some of them knew directly that they had been infected and came to Serbia to be treated for free. We will treat and cure them," Vucic said.

He once again appealed to the citizens.

The President once again urged citizens to act conscientiously.

"You people, do as you wish, we will do our job, and you as you will, my plea is just to try to understand that we are doing this for the sake of you, for the sake of our parents and our country".

Finally, the President recalled the tightening of measures.