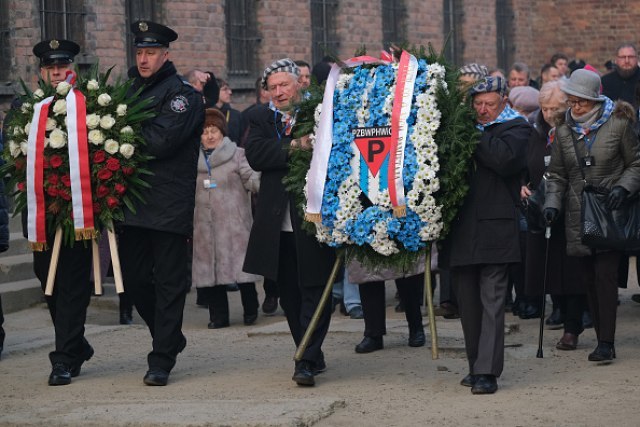 The survivors in attendance were aged between 75 and 101. They have travelled from all over the world, mainly North America and across Europe, Israel, South and Central America and Australia.

“The Holocaust was sponsored and was okayed by a government. Not only did they allow it to happen but they enforced it and encouraged regular people to become killers,” said Benjamin Lesser, a 92-year-old Polish-born Jew.

Presidents, prime ministers and royalty from around the world attended the commemorations, but not top world leaders, who visited Yad Vashem in Jerusalem earlier this week for another high-profile anniversary event.

Ronald Lauder, the President of the World Jewish Congress (WJC), which has funded the return of more than 100 survivors and their families, said: “The emphasis here is on the survivors, as it should be, not on political leaders. There will probably not be another major anniversary as we’re losing so many of them.”

David Lenga, who was 17 when he entered the camp in summer 1944, survived in part by making woolen jackets for SS guards out of camp blankets, for which he received extra food rations. He later went on to become a successful tailor in Beverly Hills.

"I refuse to let the Holocaust define my life, despite the fact it claimed numerous members of my family", Lenga pointed out.

BBC hosted a reception for the survivors and their families, who gathered at an old indoor tram station in Kraków’s Jewish quarter on Sunday night, at which they were thanked for rebuilding their Jewish communities around the world.

The Polish President, Andrzej Duda, will be among the speakers on Monday. Last week, Duda refused to travel to Jerusalem, after being denied permission to speak there, "Guardian" claims.