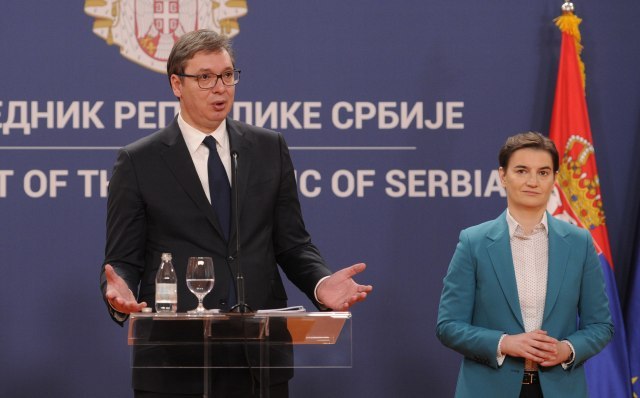 The program contains a plan of investment projects for the further development of the country over the next five years.

"Serbia is today a fundamentally different country, stable and much more respected abroad, with an unemployment rate below 10 percent, for the first time at a single-digit rate, the country with one of the highest growth rates in Europe", Brnabic said.

She underlined that Serbia is today a country where unemployment rate is below 10 percent, for the first time single-digit - 9.5 percent, which is constantly declining, while the average net salary is slightly higher than 500 euros and wages and pensions are constantly increasing.

Brnabic added that Serbia is today a country that has entered a period of stable growth with one of the highest growth rates in this part of Europe.

"This is something all citizens of Serbia should be proud of, because we were able to do this together. Today, we are here because Serbia can and deserves much better", Brnabic said.

The 'Serbia 2025' program is worth just under € 14 billion, Brnabic said, noting that the Serbia 2025 program will be financed from the budget, but also from loans from international financial institutions, with which we will continue to cooperate.

She stressed that none of the projects in the investment plan would jeopardize the country's macroeconomic stability.

"We plan to continue reducing public debt, and the Government will form a body to oversee each project, or the overall Serbia 2025 plan, so that we can know at each moment where each dinar goes and how it is spent and how each project progresses", Brnabic said.

"Serbia is on the verge of getting an investment rating today", Serbian Prime Minister added.

The presentation of the country's development program over the next five years is attended by members of the government, directors of public companies, representatives of state institutions.

After the Prime Minister, the President of Serbia, Aleksandar Vucic, addressed the audience and announced specific plans.

"In 2014, we had brought tough measures that hit every citizen of Serbia, but they were healing. And now, as things stand, we have the biggest growth in Europe," Vucic said.

This will be one of the results of the new investment plan, which, as pointed out by President Vucic, unlike the difficult reforms of 2014, will primarily affect the government, directors of public companies, EPS, Srbijagas, not the citizens.

"The first goal of the 'Serbia 2025' program is to dramatically reduce the proportion of young people leaving the country," Vucic said.

Serbian President Aleksandar Vucic said that according to preliminary data, the level of investments in Serbia amounted to 3.8 billion euros in 2019, which, he said, is higher than all the six countries of the Western Balkan together, "plus another 15 percent."

"The level of foreign direct investment in the country has increased by nine percent when compared to 2018. Serbia had the highest growth in Europe of six percent in November, and we will conclude the year with a growth of four percent although 3,5 percent was expected”, Vucic said.

He concluded that the “face of Serbia was changed” since 2014, turning the country into “a successful state which made the fastest progress in Southeast Europe”.

"We were able to be among the best in Europe not only in basketball, water polo and volleyball, but also in the field of economy where we were always last or among the last ones. In 2014, we implemented some tough measures for each of our citizens, but they were healing. The moment has come to come up with different measures for our citizens", President of Serbia concluded.

Vucic said that the Serbia 2025 program is worth a total of 14 billion euros, which is approximately an additional budget of Serbia, and that in 2025, it could amount to 17 billion euros.

"For all these projects, we will have one budget at our disposal, with a conservative interpretation of economic growth of 4.5 percent, not five or six percent, which we will fight for".

Vucic said that in January next year, the average salary would be over 500 euros, while pensions would be 245 euros.

The pensions are currently € 226, and will be almost doubled in five-year time, in real terms, the president said, adding that the retirement standard of living would be about 70 percent better than it is now.

He said that this could be due to macroeconomic stability, adding that Serbia will stay on a stable course until 2025 which will remain between 117 and 120 Dinars per Euro, as it was since 2012.

In the coming period, an additional EUR 600 million will be invested in Serbian health institutions, President Aleksandar Vucic announced.

He says that the way in which health institutions were managed during the time of Tomica Milosavljevic or Mladjan Dinkic in the previous government was a strategic mistake and that, therefore, almost all health centers and pharmacies were completely destroyed.

He expects that surely 99 percent of the announced projects under the 'Serbia 2025' program will be implemented with the aim of offering citizens a better life. "Our goal is, above all, for people in Serbia to live better", Serbian President concluded.