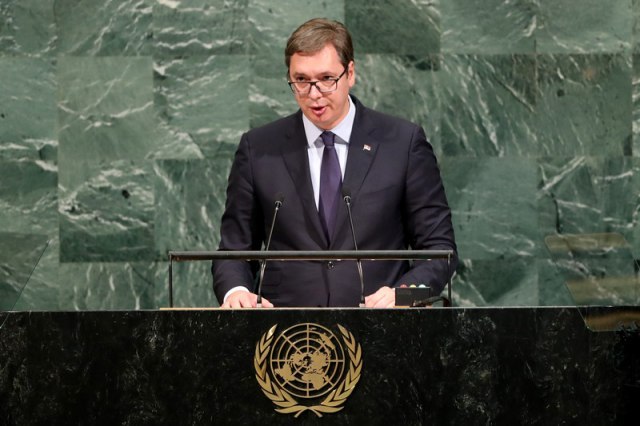 "I have the honor of addressing you as President of Serbia, the country of good and honest people. Last time I was here, it said that the situation in the world was worse in 2016. I would say it's no easier in 2019. I am a little scared, a little worried, but also a little happy that big countries have not mentioned us in their speeches", Vucic said.

The solution for Kosovo and Metohija had to be such that no one gets everything, but everyone gets enough, he said today in New York, while addressing UN General Assembly, underlining that no one wants that solution to be reached more than Serbia, for the sake of stability in the region.

"That is why we expect the great powers to understand and support our arguments, without supporting the arguments and movements that are going in opposite direction, as was the case in the period from 1999 to 2008".

"We firmly believe that we have the right to decide on our own destiny and what's best for our people", Vucic said.

"As Jovan Ducic used to say - adversaries are our friends that do not understand us, and there is certain misunderstanding between us. This is a centuries-old problem that cannot be interpreted solely through prejudice, Serbia respects the territorial integrity and sovereignty all UN member states and won’t demand anything that isn’t ours", he said. "We started fighting for a lasting solution bravely and realistically with faith. No one wants a solution more than Serbia … which is why we expect the great powers to understand and support our arguments”, Serbian President said.

He quoted former US President John Kennedy that we can’t negotiate with people who say that “mine is mine and let’s talk about what’s yours”. Pristina’s unilateral measures, such as the imposing of 100 percent tariffs on Serbian goods, make things harder while Serbia has responded moderately without imposing counter-measures, he said. He added that the solution had to be reached, the one that neither party would get all, but that both parties get enough.

President of Serbia said that he comes from a small country, the biggest in the Western Balkans, though, that suffered the most in World War I and survived great suffering in World War II. That is why Serbian people want peace and stability, and the opportunity to make further progress in 21st century.

"I will talk about Serbia and the region, because one doesn't go without the other. Serbia is not an island but a part of the Balkans. We want to advocate cooperation in the Balkans", said Vucic.

"Therefore, we will always advocate the policy of peace and negotiations as this is the only way to create necessary stability, in order to achieve economic growth and progress", Vucic said.

He pointed out that Serbia is on its EU path today, and that our devotion to this goal has never been stronger.

"Due to peace and economic growth, Serbia chooses an independent foreign policy and independent decision-making, and that is why we are not hiding even in this place. We boast good relations with China and Russia, but also ever better relations with the United States", Vucic said.

Vucic said that Serbia never hides that it leads independent foreign policy, not even in the UN General Assembly.

He said that although Serbia had excellent economic results, he asked if people, not only in Serbia but also in the region, were living well.

"We need decades of peace and devoted work and accomplishments in order to catch up with the developed European countries", Vucic added.