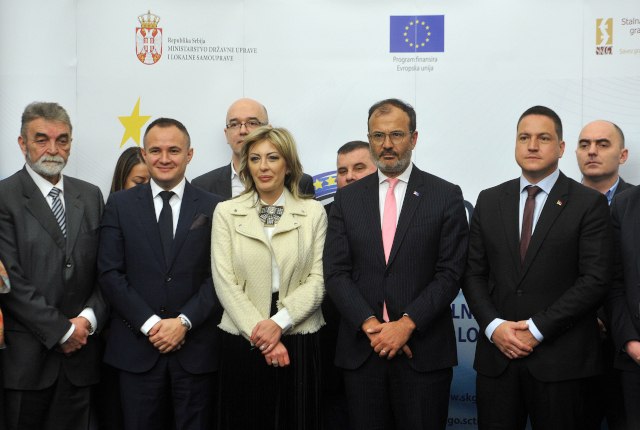 She said that the projects, for which the contracts have been formally signed today, were approved under the Exchange 5 Grant Scheme - support to local self-governments.

Minister of State Administration and Local Self-Government Branko Ruzic pointed out that municipalities, cities and their partner organizations successfully passed the selection for obtaining EU funds.

He stressed that asset management, as well as strategic planning and program budgeting deserve European support, and Exchange 5 is the real proof of that.

Head of the EU Delegation to Serbia Sem Fabrizi said that the role of local authorities in the process of Serbia's accession to the Union is significant because the main interaction of citizens and public administration takes place at the local level.

According to him, the capacity of local self-governments in Serbia has to be strengthened as more than 60 percent of EU regulations need to be implemented at the local level.

State Secretary of the Ministry of Finance Slavica Slavcic recalled that in December last year amendments were made to the Law on Public Property that additionally contributed to the strengthening of efficiency of employees in local self-governments.

Assistant Minister of Finance Marko Jovanovic said that within the framework of the EU's Exchange 5 Grant Scheme, 48 local self-government units in Serbia have been included, 18 of which are grant coordinators, while the remaining 30 are partners.