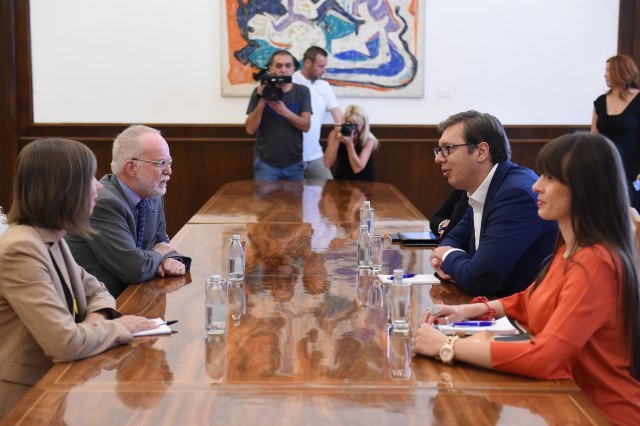 The two collocutors also discussed bilateral relationship, situation in the region and the results of the Western Balkans Summit in London.

According to the press release of the Office of the President, Vucic emphasised it was necessary to achieve a lasting and just solution for Kosovo and Metohija which wouldn't contradict the state and national interests.

"Serbia will never accept the solution that would humiliate our country and our people," Vucic pointed out.

The president also expressed interest in strengthening political dialogue between Serbia and UK as well as developing economic cooperation and increasing UK investments in Serbia.

He also thanked the UK government on their dedication to the Berlin process which was of tremendous importance for peace and stability in the Western Balkans.

Ambassador Keefe pointed out that Western Balkans Summit in London showed that his country wanted to have a positive role in the region's future in Europe and that he shared the goal about reaching a permanent stability in the Balkans.

Keefe added that UK Government continued to assist reforms in Serbia with project such as digital transformation and e-Governance financed by the Good Governance Fund (GGF).