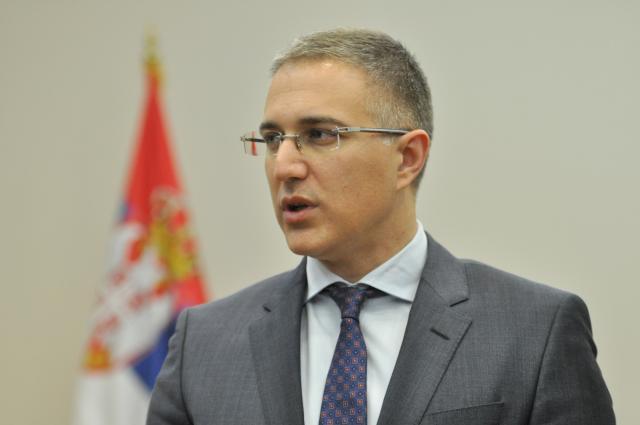 "But one can't talk to Vucic about this topic, we cannot deter him from this intention, he is not thinking about whether his personal security is jeopardized," said Stefanovic.

"It is our job is to do everything possible to protect both his safety and that of the Serbs living in Kosovo," the minister continued.

In Kosovo, Vucic will "talk to people, he wants to hear what burdens them the most currently, and wants to, with his presence, not only bring peace, but also some kind of assurance that these people have not been forgotten," Stefanovic said.

"This is very important, Vucic will not go there for 15 minutes, have his picture taken, make a statement, and that's it - like many people do. Not only will he be there for two days, he will stay on to talk, both north and south of the Ibar (River), he will dedicate that time to his people," said the minister.

"Kosovo is part of our country where we currently don't have full jurisdiction, but regardless of that, we are taking care of our people living there and will continue to," he said.

"The murder of Oliver Ivanovic, this tragic act, a terrorist act, upsets people, makes them sensitive and hurt, and the only way people can calm down and quickly restore confidence that a peaceful situation is possible is for the case to be solved quickly," Stefanovic said.

Speaking about the case on Thursday, Stefanovic said that the reaction of Kosovo Prime Minister Ramush Haradinaj was "completely unacceptable."

As previously reported by Prva TV, Pristina definitely refused Belgrade's cooperation in the investigation into the murder of Oliver Ivanovic.

Stefanovic said the reaction of Haradinaj and of the minister of justice of the Pristina institutions was "completely unacceptable."

"This reaction of the key Pristina institutions clearly indicates that there is no desire to find the killers and punish them, nor to conduct an investigation professionally, because it would have to include all investigative bodies that could help find the perpetrators and the organizers of this crime," he said.

He added that there was obviously intent to misdirect the public's attention and make it difficult and prevent uncovering the real motives for this murder, and finding all those responsible for it.

"Despite all the requests to EULEX and UNMIK to involve the investigative organs of the Republic of Serbia in the investigation process, we have been deprived of any response from these international institutions. Particularly worrying is the unprecedented practice of EULEX not taking a more active part in the investigation into a criminal offense of this kind," Stefanovic said .

He added that Serbia still insists on its prosecution, police and investigative bodies taking part in the investigation.

"We believe that only in this way can the full truth be arrived at, and the perpetrators and those who gave the order prevented from remaining unpunished," the minister said.