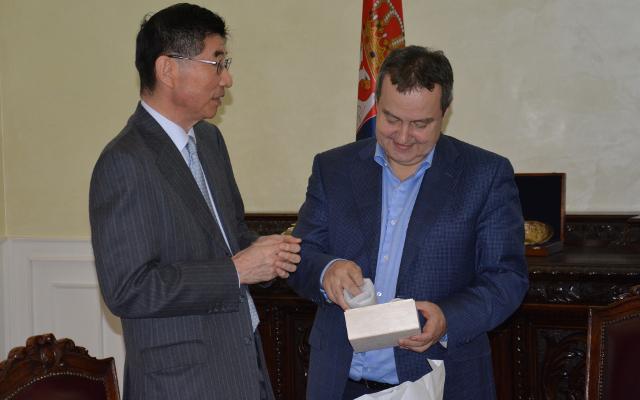 Welcoming the new ambassador of Japan and wishing him a successful mandate, Dacic "expressed satisfaction with the very good bilateral relations and the upward trend in the cooperation of the two countries."

He also expressed his conviction that the newly appointed ambassador will continue with intensive activities in order to further enhance the cooperation of the two countries, in which the Ministry of Foreign Affairs of the Republic of Serbia is ready to provide him with all assistance and support.

Dacic estimated that the relations between the two countries are constantly going upwards and expressed readiness for further strengthening of the mutual dialogue.

He also expressed "special satisfaction with the upcoming visit to the Republic of Serbia by Prime Minister of Japan Shinzo Abe, which will significantly contribute to the improvement of the overall cooperation of the two countries."

The interest of Serbia and Japan to further link the economies of the two countries was emphasized, with the strengthening of economic as well as other forms of cooperation, with a special emphasis on the increase of Japanese investments in Serbia, as well as joint appearance in third markets.

Dacic reiterated his gratitude for the high degree of solidarity shown by the people of Japan towards Serbia through donations and grants.

The first deputy prime minister assessed that support and solidarity are reciprocal and that they represent a lasting value in the further development of friendly relations between Serbia and Japan, according to the statement from the Ministry of Foreign Affairs.