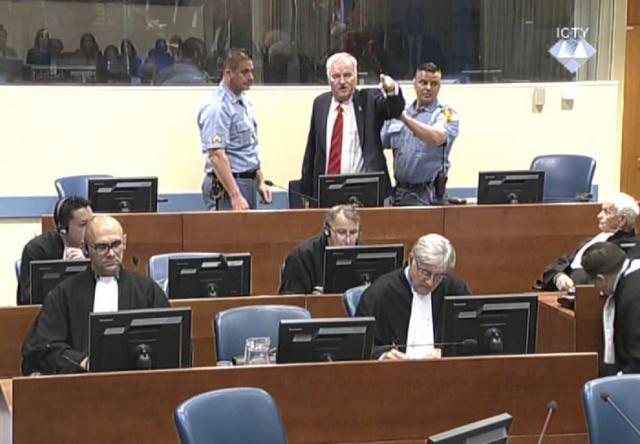 Mladic was found not guilty on one count of genocide (seven municipalities), but guilty on the second (Srebrenica), as well as on all other counts of the indictment.

"The crimes committed are among the most horrible known to humanity - and they include genocide and extermination. The defense referred to various factors, to his good intentions, good character, poor health, advanced age, mental state. The chamber believes that these factors have little or no weight," Judge Alphons Orie said as he read the verdict.

Both the prosecution and the defense have the right to appeal today's first instance judgment.

Mladic was arrested in Serbia in May 2011 after spending 12 years hiding. He was extradited to the Hague Tribunal, where his trial started in May 2012.

Despite his ill health, the former military leader of Serbs in Bosnia arrived to the courtroom today, crossing himself, smiling, and giving a thumbs-up.

But the proceedings were interrupted for almost an hour as the judge ordered a break at the request of the defense, during which Mladic was tended to by the doctors for high blood pressure.

When he returned to the courtroom, Mladic refused to sit down and started shouting that "everything being said was a lie." He was then warned several times and had his microphone switched off, and was eventually removed from the courtroom.

With today's ruling, the Hague Tribunal concluded its work.