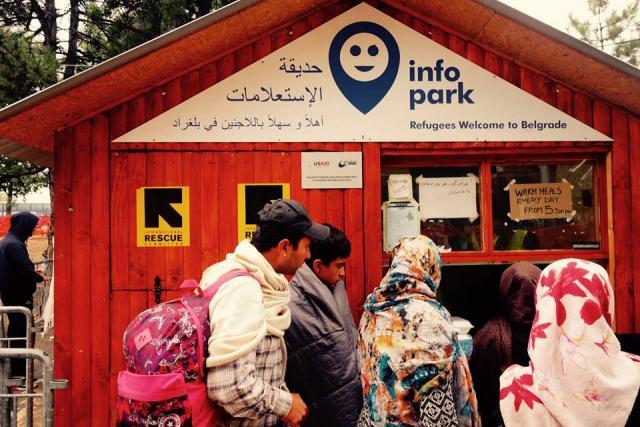 Anahite (name has been changed to protect identity) is a young woman from Afghanistan whose greatest wish was to reunite with her husband who has been working in Frankfurt, Germany for seven years. After waiting for eight months to legally apply for asylum in Hungary, she came to Info Park seeking information about returning to Greece.

A month later, Info Park received a postcard with her regards from Germany. Anahite realized her dream – she went to Frankfurt via Athens, and was with her man. Anahite is one of over 600 people who are estimated to have returned from Serbia to Greece over the course of the summer of 2017 (combined information from various humanitarian organizations in Serbia & Greece and Info Park’s team). Since March, Info Park alone assisted the return of 94 refugees and migrants by providing information about all aspects of the process, enabling them to make well-informed decisions.

Looking into the reasons behind this trend, Info Park team conducted a survey based on structured interviews with refugee population in Belgrade. In July, August and September, a total of 90 refugees and migrants who expressed interest in returning to Greece were surveyed.

Survey results show that the strong pull factor was the expectation of the respondents to stand a better chance of reaching their desired destination from Greece. Furthermore, they felt encouraged by presumed faster asylum procedures and better outcomes of the application. Once their asylum request is processed, respondents expect to obtain travel documents, enabling them to leave Greece for other EU countries.

No Viable Asylum Options in Serbia

The main push factor from Serbia are the ’closed borders’ with strict controls that make crossing into Croatia or Hungary almost impossible without the use of smugglers who charge huge amounts of money for a very risky journey. In addition to this, the majority of the respondents stated that they wanted to return to Greece due to slow asylum procedures in Serbia, lack of financial aid during the process and poor conditions in some of the camps. Some participants spent between 8 and 12 months in the camps before their procedure even begun; some remained unregistered, hence – illegal. In 2017, Serbia granted only three asylum requests, thus sending a clear message to those hoping to get international protection.

Economic reasons are high on the list of motivating factors for return. Respondents often mentioned that Serbia didn’t offer any economic perspective, and that the financial aid was not available to all refugees and was not remotely sufficient in comparison to 150 euros that the respondents expected to receive from the Greek asylum system.

Even if they can’t find a quick way to reach the EU, respondents expressed belief that in Greece they could more easily support themselves by accessing seasonal jobs in agriculture.

According to information collected during the survey, a trip to Greece facilitated by smugglers costs between 1,000 and 2,000 euros. However, the field experience showed that reaching Greece without any additional costs, apart from paying public transportation, was not difficult. Refugee travel on public transport was tolerated and all they needed to do is to illegally cross Serbian, Macedonian and Greek borders. No violent push-backs were reported.

No Asylum in Greece Either

First returnees were noticed by Info Park in March 2017. Since they were able to return to Greece without consequences, the numbers increased drastically until July, when the Greek government started denying asylum to those who once absconded. However, the trend continued in the first autumn weeks with both single men and families.

Is This to Stop?

The trend raises the question of safety of the people who decide to undertake this journey. The summer increase in irregular crossings from Serbia to Romania did not reverse the trend of returns to Greece: in the first days of October, Info Park’s team encountered several refugees and migrants intending to head back. For those in Serbian camps who cannot afford to pay the smugglers to continue towards Western Europe, return to Greece will continue to be an option. The endless waiting turns into hopelessness, and that is the motivation no one should underestimate.

Info Park, a unique refugee support project in Belgrade, Serbia, was established in September 2015 as a joint initiative of Trag Foundation and Fund B92