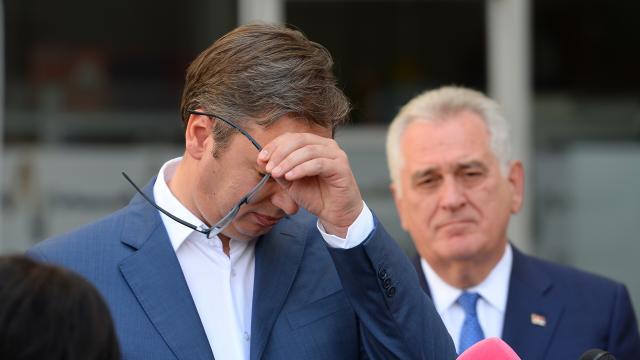 He was responding to journalists, who wanted to have his comment on Russian historian Elena Guskova's statement that "the opening of a dialogue leads to the recognition of Kosovo."

"It's good that there is participation in the dialogue. We welcome this. It is good that we hear every opinion, from those we heard from Mr. (Vojislav) Seselj, with (Tsar) Lazar's curses, to (former President) Tadic, with a chair in the United Nations (for Kosovo, without formal recognition) - you heard at least three different proposals from (members of) the government, and it's good that people have opened up to talk about what they think. Then we will sit down with the citizens and talk about what is possible, and what we must not lose," Vucic said.

In addition, Vucic stated today that Serbia does not want to be a member of any military alliance:

"We're not even discuss NATO, at all. Serbia does not want to be a part of any military alliance. Serbia has its own army. The question, do you want to join NATO? No. Do you want to join CSTO? No, we don't want to enter CSTO. We have the Serbian army and it will be strengthening. Stop conducting Serbia's policy from all sides. We will not enter NATO, thank you. We will not enter CSTO, thank you."

"Everyone expects Serbia to be take sides," he added.

"Serbia is not sitting on two chairs, as some claim. Serbia has its own, Serbian chair and nobody else's. We are choosing our own path to the future," Vucic underlined.

According to him, Serbia is "more than ever exposed to various pressures from different sides."

"Nobody is satisfied with the position of Serbia, because it is an independent state and takes care of its interests, under conditions of a growing conflict between great powers, when more than 750 persons are being expelled from diplomatic missions, so the sharp rhetoric is understandable," Vucic said.