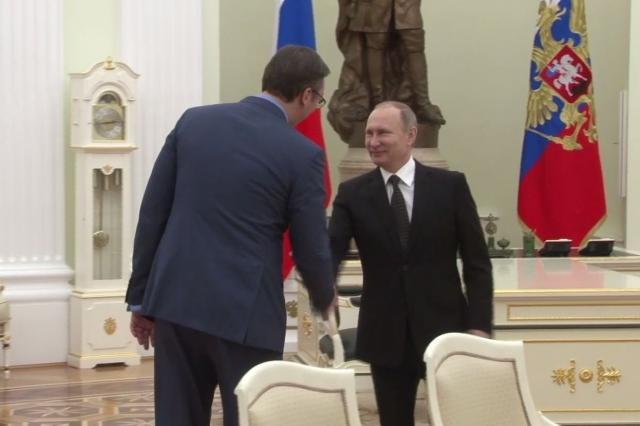 According to a statement, Deputy Secretary General of the United Russia Council Sergei Zheleznyak conveyed his party's and Putin's support during a meeting with SNS officials Marko Djuric and Nebojsa Stefanovic, stating that "Vucic's victory would contribute to continued development of Serbia as a sovereign state."

The statement also points out that such an outcome of the elections would "encourage further development of economic and political relations between Belgrade and Moscow."

Djuric and Stefanovic expressed their gratitude for the continuous and consistent support of United Russia and the Russian Federation "to Aleksandar Vucic, the Serb Progressive Party (SNS), and the Serbian state and nation."

The officials also "discussed a number of areas of cooperation between the two parties where it would be possible to implement projects of broader social significance, with the involvement of the public in both countries."

The SNS announced that the meeting "also touched on the need to preserve the stability of the region, to which creating a zone of military neutrality would contribute, that could, apart from Serbia, also include some other countries of the Western Balkans, in accordance with the Balkan B4 initiative."

"The collocutors noted that an increase in harmful activities of groups funded by foreign foundations and centers of power, in the region, but also in the Russian Federation - whose aim is to create internal social conflicts, endanger the sovereignty of states, and diminish the potential of citizens for democratic decision-making," the statement said, and cited Zheleznyak as noting:

"The threats faced by our parties and our countries are similar, and therefore it is very important that United Russia and the Serb Progressive party continue their intensive cooperation."