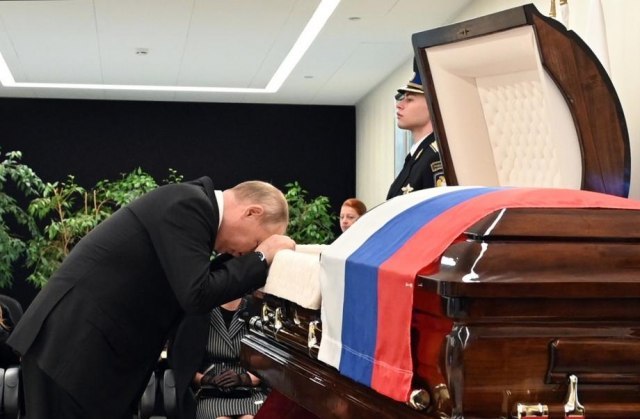 Photographs of a crushed Putin over his associate's deathbed have traveled the world.

For Putin, Zinichev was more than an associate, although he was officially the Minister of Emergency Situations.

He was also Putin's personal bodyguard for a while.

Media report that Putin twice bowed over the casket of his deceased friend.

He came to the funeral with a bouquet of red roses, and sat next to the Zinichev family.

Zinichev was tragically killed on Wednesday during the exercises of the ministry he managed.

He was standing on the edge of the abyss, when the cameraman slipped and fell. Zinichev immediately jumped off the rock in an attempt to save the man from the water, but he hit the rock and suffered severe injuries.

Both were hospitalized, but Zinichev died during the helicopter transport.

Zinichev, who is considered Putin's man, was born in 1966 in St. Petersburg.

He was a member of the army for many years, and he served in the Northern Fleet of the Russian Navy.

He joined the Soviet KGB security service in 1987, and after major changes in the country, he continued his career in the FSO, the Federal Security Service.

Zinichev also performed the responsible function of the deputy head of the FSB, the famous Russian service for combating terrorism.