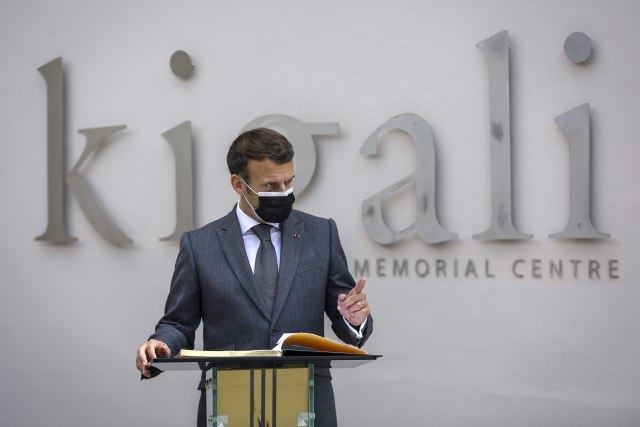 "France did not listen to those who warned it of the impending massacre in Rwanda and de facto sided with the 'genocidal regime,'" Macron said during a speech on the genocide at the Gisozi Memorial Center in Kigali, where more than 250.000 Tutsi people were buried, Reuters reports.

But France, as Macron stated, "was not an accomplice" in the genocide.

"On this journey, only those who experienced and went through that night may be able to forgive and offer us the gift of forgiveness," Macron said.

Upon his arrival in Kigali, the capital of Rwanda, French President was welcomed by the President of Rwanda, Paul Kagame, according to the AP agency, adding that French President is trying to improve relations with that Central African country 27 years after the genocide.

Macron arrived in Kigali early this morning, after which he went to the presidential palace to meet with Kagame. French President then visited a Kigali Genocide Memorial that witnessed the horrific massacre of 1994, in which about 800.000 people, mostly members of the Tutsi minority and moderate Hutus, who tried to protect them from Hutu extremists, lost their lives.

The visit followed the publication of a report by the French investigative commission in March, which said the colonial stance "blinded" French officials and that the government bore "serious responsibility because it did not foresee the massacre".

However, the report freed France from direct complicity in the murder of more than 800.000 Tutsis and moderate Hutus.

Rwandan President Paul Kagame, who said earlier that France had participated in the genocide, said last week that the report "means a lot" to the citizens of Rwanda. The citizens of Rwanda "may not forget, but they can forgive" France for its role, said Kagame, a member of the Tutsis and a major figure on Rwanda's political scene since his rebel army ended the killings of death squads loyal to the Hutu-led government.

Macron, who tried to distance France from its colonial past, said in April that official Paris would open the archives of former President Francois Mitterrand about Rwanda, as part of efforts to better understand the role of Paris in that African country during the genocide, RTS reported.