BBC looks at "homophobia in Serbia"

The BBC has published an article headlined, "Homophobia in Serbia: 'I was abused for being gay'." 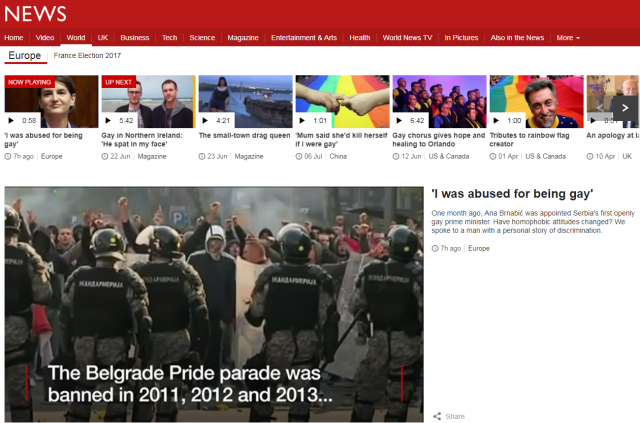 It looks into whether homophobic attitudes in Serbia have changed since Ana Brnabic became PM.

A short video posted on the BBC website features Goran Miletic, one of Belgrade Parade organizers, who said that in Serbia, it is not important whether or not someone is really gay - but that they will be attacked if they are recognized as gay by the community.

A CeSID poll dating back to 2012 is then cited, that showed 48 percent of respondents thought homosexuality was a disease that should be treated.

According to Miletic, there are several taboos in Serbian society - one must never say that Serbs are war criminals, the other is LGBT, and there is Russia - one can never say that Russia is not a friends of Serbia.

The report then observes that Brnabic became Serbia's prime minister last month, the first woman to hold that office, and the first openly gay person.

Miletic commented on this by saying it was important for every Serbian citizen to see a lesbian prime minister on TV every day.

As for whether there will be any changes in the lives of the LGBT population, the activist said this would depend on others more than on Brnabic.