The three-year-old girl Lenka will be returned to the Savic family, the Minister of Labor, Employment, Veteran and Social Policy, Zoran Djordjevic, said today 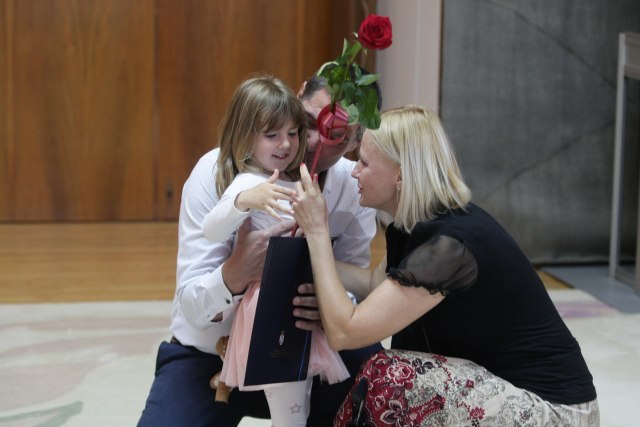 At the press conference in the Palace of Serbia, Djordjevic said that he made a decision today to approve the adoption to the Savic family, on the recommendation of the commission that reviewed the documentation in accordance with the law.

The greatest joy for the Savic family, apart from the positive decision, was the presence of the girl Lenka, who was the "star" of the conference today.

The Minister congratulated the Savic family and wished them to take care of the child, to grow up in normal circumstances, and that such a case would never happen again in Serbia due to "sloppiness" in the procedure during adoption.

Borislav (48) and Biljana Savic (52) from Belgrade were deprived of socially adopted girl Lenka by social workers due to a mistake they made in the procedure during the adoption eight months ago.

The girl Lenka returned to the Savic family today, and Minister Zoran Djordjevic said at the press conference in the Palace of Serbia that he made the decision to approve the adoption on the proposal of the commission that reviewed the documentation in accordance with the law.

The girl Lenka was the biggest "star" at the conference today, and her parents were the happiest when she ran into the hall and hugged them.

The Minister congratulated the Savic family and wished them to take care of the child, to enable her to grow up in normal circumstances, and expressed hope that such a case would never happen again in Serbia due to "sloppiness" in the procedure during adoption.

"This is a warning to everyone, because such unwanted consequences always break down on the child," the minister said.

Father Borislav Savic thanked everyone in the country and the region who provided them with selfless support in their fight for the child, but also all the media houses that, as he says, followed their case in a dignified manner.

"This huge support obliges us to become parents that our daughter will be proud of," Savic said.

He added that they always believed that law and justice were on their side and that their case could not end other than by returning Lenka.

Mother Biljana Savic reiterated that 10 days ago, when social workers took her to the foster family where Lenka stayed before the adoption, she told the girl that she had to stay in the foster family because "her mother has to finish some important work".

Today, the mother told the girl that "mom has done an important job" and that she can return home.

"There is no end to our happiness. We survived hell for these 10 days, but we managed to stay calm, because we firmly believed that justice was on our side," Savic said.

Socially adopted girl Lenka was taken away by social workers from Borislav (48) and Biljana Savic (52) from Belgrade on June 8, due to a mistake in the adoption procedure made eight months ago by the Center for Social Work in Subotica.