21 years since the NATO bombing 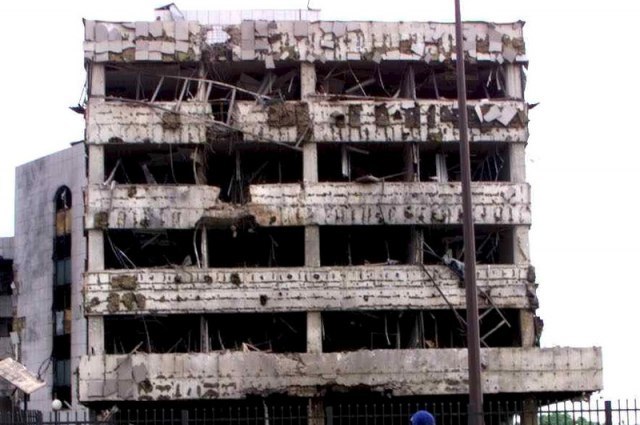 The sirens were heard for 78 days and the total number of casualties was never determined. An estimated 1,200 to 2,500 people were killed in the 11 weeks, with total material damage estimated at tens of billions of dollars.

The attack on Serbia, or the FRY, was carried out without UN Security Council approval, which was a precedent.

The order was then issued by NATO Secretary General Javier Solana to the then commander of the Allied Forces, US General Wesley Clark.

Clark later wrote in the book "Modern Warfare" that the planning of NATO's air operation against the FRY "was well underway in mid-June 1998" and was completed by the end of August that year.

After the Serbian Parliament confirmed that it did not accept the decision on foreign troops in its territory and suggested that United Nations forces monitor the peace settlement of the conflict in Kosovo, NATO launched air strikes with cruise missiles and aviation at several places on March 24, 1999 at 19.45 in Serbia and Montenegro.

Nineteen Alliance countries have launched bombing operations from ships in the Adriatic, and from four air bases in Italy.

First, the air defense and other objects of the Yugoslav Army were targeted, in Pristina, Batajnica, Rakovica (Strazevica), Mladenovac and elsewhere.

Total material damage was then estimated at $ 100 billion. NATO's wartime losses in manpower and technology have never been made public.

Authorities in Belgrade at the time claimed that dozens of aircraft had been knocked down, which was never confirmed. Russia's APN reported that NATO lost over 400 troops and over 60 aircraft, while US President Bill Clinton said in a June 10, 1999 speech that NATO had suffered "no casualties".

There is almost no city in Serbia that was not targeted during the 11 weeks of the attack.

A third of the country's power capacity was destroyed, two refineries in Pancevo and Novi Sad were bombed, and NATO forces first used so-called graphite bombs to disable the power system.

After continuous diplomatic pressures, the bombing ended with the signing of the Military-Technical Agreement in Kumanovo on June 9, 1999, and followed by the withdrawal of the FRY forces from Kosovo and Metohija three days later.

Since the NATO Secretary General issued an order to end the bombing on June 10, 1999, final missiles have fallen in the area of the village of Kololec (not far from Kosovska Kamenica) at 1.30 pm.

On that day, the UN Security Council adopted Resolution 1244, and 37.200 KFOR troops from 36 countries were sent to the province, tasked with safeguarding peace, security the return of refugees until broad autonomous status was defined.

Forum: NATO Aggression was and still is a crime against peace

NATO's aggression against Serbia 21 years ago was and remains a crime against peace and humanity because the action was carried out without the approval of the UN Security Council and is a gross violation of the UN Charter, the OSCE Final Document and its own Founding Act, Belgrade Forum for the World of Equals estimated on the occasion of marking the anniversary of the beginning of the NATO bombing of the then FRY.

"The aggression and subsequent occupation of Kosovo and Metohija, the illegal establishment of camp Bondsteel, one of the largest US military bases in the world, the unilateral declaration of UN-mandated territory, gross violation of UNSCR 1244, represent dangerous precedents, severe blows to European and the global security system, as well as encouraging the spread of separatism and terrorism with unprecedented consequences", Belgrade Forum said in a statement.

It is alleged that the Forum, the General and Admiral Club of Serbia and the United Youth Foundation sent a letter of protest to the Norwegian Nobel Peace Prize Committee on the initiative to award the prize to NATO.

The aforementioned organizations also believe that the authorities ask NATO countries for compensation for war damage, to list all victims of aggression as soon as possible and to initiate the work of a government body to determine the consequences of using depleted uranium missiles, to establish and build a Serbian memorial for victims of genocide in the 20th century, such as the Yad Vashem Memorial (The World Holocaust Remembrance Center) in Israel and the Ararat Memorial in Armenia.

They also believe it is time for the governments of NATO and EU member states to reconsider their role in the 1999 aggression and policies against Serbia and the Serbian people, to apologize publicly for the victims and illegal destruction of Serbia (FRY) and to return to the implementation of UNSCR 1244 as the only acceptable, principled basis for a just and sustainable peaceful solution to the future status of Kosovo and Metohija, as a province with broad autonomy within Serbia, the statement said.