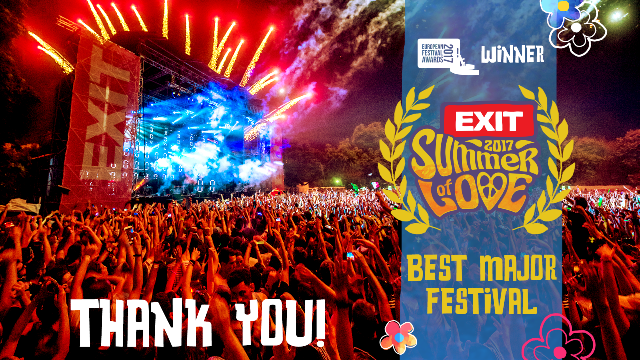 EXIT has won in the main category in the competition of 350 festivals from more than 35 countries, with over one million votes of the audience and the opinion of an expert jury composed of the most prominent people in the world music industry.

EXIT festivals were in the finals in six categories, and EXIT alone in record three categories, including the main prize for the best European festival, the best festival organiser in Europe and the "Take a Stand" award for social activism.

Founder of the EXIT festival Dusan Kovacevic said that it is an amazing success to win again after four years the most important festival prize in the world.

He said the award was won in the toughest category, with the largest European and world festivals that have budgets ten times bigger than that of EXIT.

The feeling is indescribable, we are extremely proud that we have brought back the greatest recognition to our Novi Sad, the European capital of culture, to our Serbia, to our region, Kovacevic said.

This is the second championship title won by EXIT at the European Festival Awards since their foundation in 2010, and every year it is shortlisted for the best European festival.

EXIT had previously won the Best European Grand Prix Award for 2013, while in 2007 it was voted the best European festival outside the UK by British Festival Prizes.

The winners are selected by audience from all over Europe, together with an expert jury, made up of prominent individuals from the festival industry.