Belgrade to have "rival" Pride Parades

Pride Parade will be held on Saturday, June 24 in Belgrade, organizers have announced. 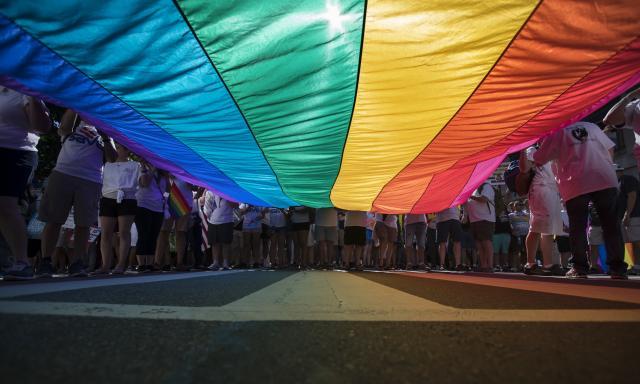 Pride Weekend, June 23-26, during which Pride walk is held, is organized by Citizens' Association Egal, Loud & Queer, and the Gay Lesbian Info Center.

This year's Pride will be organized "in light of the increase in the level of violence faced by the LGBT community," the associations said, Beta reported on Wednesday.

As announced, organizers are trying to show that LGBT is primarily a gender, minority issue, and that they advocate equality of women and men, at the same time loudly standing against misogyny and all forms of violations of human rights of members of vulnerable social groups.

"That is precisely why we will walk proudly on Saturday, because we are citizens of a state that guarantees safety and equality with its Constitution and laws," a statement said.

Organizers also announced that by staging a protest walk, they will try to remind that it is necessary to consistently apply and always improve the existing framework.

They also seek the state's zero tolerance towards violence, professional attitude of members of the police towards victims, and consistent application provisions regarding hate crimes.

One of the demands is to enable, simplify and speed up procedures for issuing all personal documents to transgender persons.

According to the statement, application of the Law on the Prohibition of Discrimination is demanded, as well as implementation of the Action Plan for the Strategy for Prevention and Protection against Discrimination, and legal regulation of same-sex unions.

As the June 24 gathering, that will take the form of a protest, was announced, it emerged that "the traditional" Belgrade Pride would be held in September, and that there are two different groups of activists behind the two events.

There have also been disagreements between them in the past. Organizers of "the June Pride" say "the September Pride" is not inclusive enough, and was aiming to benefit not members of the LGBT community, "but guests from the world of politics, the diplomatic corps, and others."

During previous years, accusations were heard at the expense of Pride organizers as having "personal interest."

Representatives of the associations behind the gathering scheduled for next Saturday also said on several occasions that they were not invited to be a part of the September Pride, that is held with high security measures in place, and last year brought together several hundred participants.

On the other hand, Goran Miletic, Civil Rights Defenders director for Europe, and one of organizers of Belgrade's "traditional" Pride Parade, announced on Facebook that Pride 2017 would be held on September 17, and Pride Week on September 11-17.

"Everyone has the right to create whatever gathering they like and draw attention to it by calling it Pride Parade. That's not nice or ethical, but that's the way it is. I wish all the best to organizers of all gatherings aimed at improving the position of each discriminated community. We choose the methods we believe in, while Belgrade Pride will never be based on attacking those with whose methods and work we disagree. Join us in September," Miletic wrote.