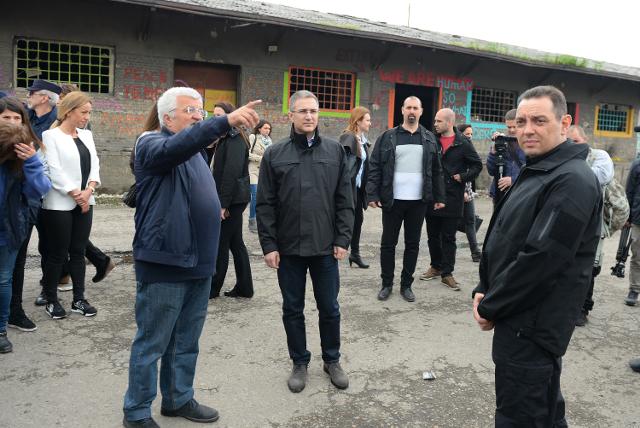 Minister of the Interior Nebojsa Stefanovic said this on Friday as he toured abandoned warehouses and shacks near the city's main bus station where migrants stayed until recently.

He said the area was a meeting place for human smugglers, and a potential source of contagious diseases.

"These places are completely unsafe and inadequate to house migrants. We pleaded with them for a long time to move to adequate centers where they would be treated properly. Today we are demolishing these structures, and we managed to move migrants into reception centers and in that way increase safety of Belgrade's residents and secure better conditions for the migrants," Stefanovic said.

According to him, there are currently about 8,000 migrants in Serbia, hoping to reach the EU.

"We managed to deter more than 21,000 migrants from entering Serbia since July 2016 when we introduced joint military-police patrols on our borders. The problem of entry to our country is under control thanks to these patrols, but that's not a solution. What's missing here is an essential European policy and the answer to the question, what to do with economic migrants," he told reporters.

Stefanovic was accompanied by Minister of Labor, Social and Veteran Affairs Aleksandar Vulin, who said that Belgrade is the only European capital that managed to transfer migrants from its central parts without any violence or clashes.

"I thank the MUP (Interior Ministry) and the Commissariat for Refugees, for managing to transfer more than 1,000 migrants to adequate facilities without a single incident. We have shown these people what's better for them, refraining from violence. These hutments will be completely removed, and we will not allow irresponsible settling of migrants not only in Belgrade, but also elsewhere in Serbia, because capacities exist to accommodate all of them," Vulin said.