Today marks 22 years since the forces of the Army of the Serb Republic entered Srebrenica on July 11, 1995 and committed a war crime. 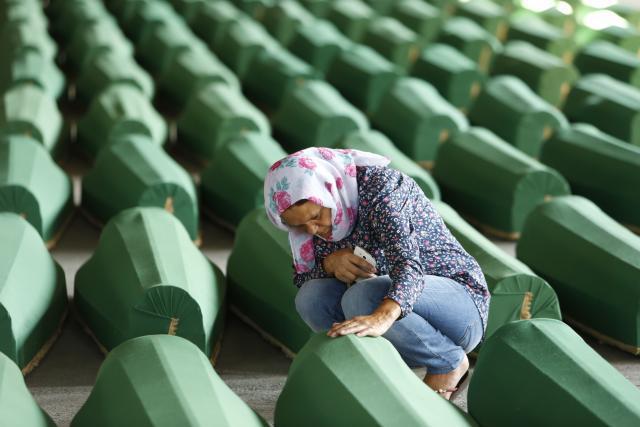 According to the judgments of the international court, genocide was committed in Srebrenica, and about 8,000 people were killed.

Two years after the attack on then Serbian Prime Minister Aleksandar Vucic, Serbia has no official representative at the commemoration.

Last year, after a new round of arguments and tensions between Serbia and Bosnia-Herzegovina (BiH) a message came from Srebrenica that top Serbian state officials were no longer desirable at the Memorial Center.

Belgrade said that it "understands the message" and this was underlined by current President Vucic last night - he said that "Serbia did not receive an invitation." And for that reason representatives of the opposition are in Potocari - instead of Prime Minister Ana Brnabic or Vucic - leader of the PSG movement Sasa Jankovic was there already, while LDP leader Cedomir Jovanovic will also once again pay homage to the victims.

The marking of the anniversary at the Potocari Memorial Center starts at 11:30 hours with the sounding of the anthem of BiH and an address to the guests.

After that, respects will be paid to the victims followed by the laying flowers and the religious part of the program and the burial of the remains of 71 Srebrenica victims.

The period leading up to the anniversary in the former Yugoslavia area has been perhaps unusually quiet, but was somewhat noisier on the international scene. The Appellate Chamber of a Dutch Court confirmed last month the Netherlands was in part liable for the death of 300 Muslims in Srebrenica.

At the same time, Dutch members of the former UN peacekeeping mission in BiH have filed a lawsuit against their state. They demand a total of 4.5 million euros in compensation for sending them to Srebrenica in 1995, "although it was then clear that it was an impossible mission."

It is worth pointing out that during the July calm on both sides the word genocide was mentioned somewhat less than usual - something that is more than obviously a huge stumbling block in attempts to really achieve regional reconciliation and improvement of relations.

The International Court of Justice in The Hague in 2007 issued a verdict that qualified the Srebrenica massacre as an act of genocide. Resolutions on Srebrenica confirming this judgment were then passed by parliaments of EU countries, Canada, the United States and Australia.

A British draft resolution on Srebrenica failed in the United Nations Security Council in 2015, after Russia vetoed it. However, in the days after that, a resolution stating that a genocide occurred was adopted by the US Congress, and then by the European Parliament.

At the beginning of July 2006, the Serbian government condemned all war crimes committed during the Yugoslav wars, among which were particularly mentioned the crimes against Muslims in Srebrenica, and against Serbs in nearby Bratunac, eastern Bosnia.

Four years later, the Serbian Assembly adopted a declaration condemning the crime against the Bosniak (Bosnian Muslim) population of Srebrenica in July 1995, as determined by the judgment of the International Court of Justice.

The attack on Srebrenica began on July 6, 1995 and ended five days later with the entry of the VRS under the command of General Ratko Mladic to the city.

The Dutch UN battalion was stationed in the enclave at the time of the attack by the Serb forces.

At the time, Mladic told a television station from Pale that he was in the "Serb Srebrenica", that he was "surrendering the town to the Serb people" and that "the time has come to take revenge on the Turks" in that area.

According to the indictments of the Hague Tribunal, soldiers under the command of General Mladic killed about 8,000 Muslim men and boys in an organized and systematic way by July 19. About 30,000 women and children were deported in two days. The number of victims is to this day a point of dispute between the two sides.

In November 2004, the RS government sent an apology to the families of Bosniaks in Srebrenica, finding that "a large-scale crime" took place in Srebrenica. A report by the government commission for Srebrenica stated that during the offensive of the Serb forces in the then "protected zone" in July 1995, 7,800 Bosniaks were killed.

Bosnian Serb leaders Radovan Karadzic and General Ratko Mladic were charged for the crime. Karadzic was arrested in July 2008, after 13 years of hiding, and Mladic in May 2011, after 16 years of hiding.

In March 2016, the Hague pronounced the first-instance verdict against Radovan Karadzic for crimes in BiH sentencing him to 40 years in prison, in which he was said to be responsible for the genocide in Srebrenica and the siege of Sarajevo. Mladic's trial is still ongoing, and the verdict is expected to be issued in November.

In December 2012, the Hague Tribunal sentenced General Zdravko Tolimir, a former aide to Ratko Mladic and the wartime chief of the VRS Main Staff Intelligence, to life imprisonment, pronouncing him guilty of genocide against Muslims from Srebrenica.

The Hague Tribunal Appeals Chamber acquitted former Yugoslav Army Chief of Staff Momcilo Perisic on February 28, 2013, on charges of aiding and abetting crimes against Muslims in BiH in 1993-95 and Croats in Croatia. Perisic was initially sentenced to 27 years in prison.

Three months later, the same chamber of the Hague Tribunal also acquitted former Chief of the State Security Service of Serbia Jovica Stanisic and his assistant, Frank Simatovic, who were charged of crimes against non-Serbs during the wars in Croatia and BiH.

In June 2010, the Hague Tribunal sentenced former VRS officers Vujadin Popovic and Ljubisa Beara to life sentences for genocide. At the same time, five other officers of the RS Army and Police were sentenced - Drago Nikolic to 35 years in prison, Ljubomir Borovcanin to 17, Vinko Pandurevic to 13, Radivoje Miletic to 19 and Milan Gvero to five years in prison.

For the crime in Srebrenica, the first to be sentenced, in 1998, was Drazen Erdemovic, a member of the VRS diversion squad, who was under the command of Mladic's General Staff, and who received five years in prison.

He admitted that he participated in mass executions of Muslims from Srebrenica on July 16, 1995 at the Branjevo Farm near Pilica. According to his estimation, about 1,200 men and boys were killed on that day.

It was the first judgment of the Hague Tribunal for genocide.

During the trial, Krstic named Ratko Mladic and five other officers as responsible for the massacre of Muslims in Srebrenica.

For crimes in Srebrenica, the Hague Tribunal also sentenced former VRS officers Momir Nikolic to 27 years in prison, Vidoje Blagojevic to 18, Dragan Obrenovic to 17, and Dragan Jokic to nine years.

In memory of the killed Bosniaks, a Memorial Center was built in Potocari near Srebrenica, officially opened by former US President Bill Clinton on September 20, 2003.

In the cemetery within the Memorial Center, the remains of the identified victims are buried. So far, 6,241 victims have been identified from mass graves and buried. They were found in more than 150 different sites in the Podrinje area, of which 74 were mass graves.

By the decision of the European Parliament, in January 2009, July 11 was proclaimed Day of Remembrance of the Genocide in Srebrenica. Of the countries in the Western Balkans, this decision was accepted by Montenegro, Croatia and Macedonia.

The State Parliament of BiH declared July 11 a day of memory in the Federation of BiH, the Muslim-Croat entity in Bosnia, but not in the territory of the entire state, because of the opposition of the RS (Serb Republic) deputies.

By a decision of this parliament, on July 11 was this year was declared a day of mourning throughout the territory of BiH.

Ahead of the marking of the 15th anniversary of the Srebrenica massacre, the RS Assembly refused to adopt a resolution condemning this crime.

In April 2013, the Dutch Defense Ministry announced that the Dutch state would pay 20,000 euros in damages to the relatives of three Muslims who were thrown out of their camp by Dutch officers, and who were then killed in 1995 in Srebrenica.

This verdict was the first time that a state was declared responsible for the activities of its soldiers working under the auspices of a UN mandate.