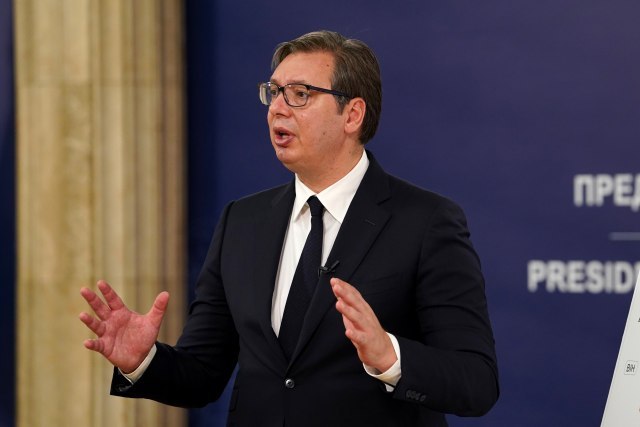 When asked how he sees rather nervous reactions of the non-governmental sector pertaining to money control, as well as the reaction of the American Embassy that this "seems to be a selective action" of the Administration for Prevention of Money Laundering, Aleksandar Vucic said that everything is always considered to be politics here.

He pointed out that there can be no difference when it comes to the application of the law.

In that context, he says that one of the ministers called him this morning and asked why he was also on the list of the Administration for the Prevention of Money Laundering.

He also notes that it is always necessary to "make fuss" in order to get more money from donors.

"Whenever they are allegedly endangered, they get a little more money," Vucic said, commenting on the reactions of the non-governmental sector.

As he said, he has not commented on that so far, but he was waiting to be found guilty again for something that is happening in Serbia.

Commenting on how his guilt can be seen in everything, offering meaningless arguments, he referred to the remark of Milan Antonijevic from the Open Society Foundation that the monument of Stefan Nemanja will have "turn its back to the clock at the train station".

"Imagine, turning back to the clock... So, what should we say about Prince Mihajlo, who turned his back to the National Museum? What should we do with the monument of "The Victor" (Pobednik), whose back is turned to the whole city of Belgrade? And those who were against the fountain on Slavija - if someone asked them what is wrong with the fountain, no one would know what to say, even though the previous roundabout was ugly", Vučić explained, adding that one has to get used to always being guilty.

"Do you always have to hate everything in this country?" Vucic asked, referring to the non-governmental sector.