Vucic and Thaci met at the White House; "I only asked Albanians one thing"

Serbian President Aleksandar Vucic and his counterpart Hashim Thaci met at the White House, as Voice of America in Albanian reports 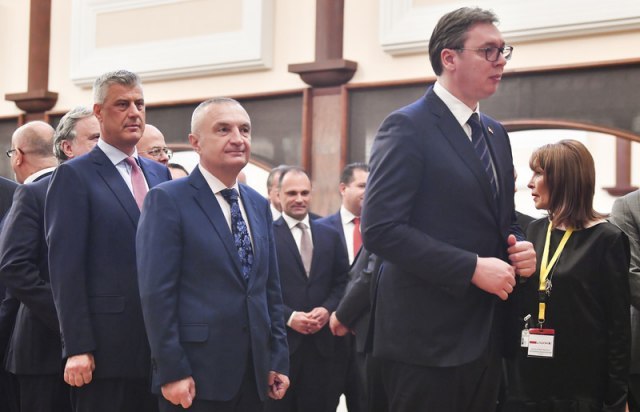 It is not yet clear in what format they met, but earlier it was announced that the President of Serbia would be hosted by the U.S. National Security Advisor Robert O'Brien.

The two presidents are in the United States on separate visits.

The President of the so-called Kosovo and the President of Serbia are major negotiators of the two sides of the EU-led dialogue that has been frozen since November 2018, when former Kosovo authorities led by then Prime Minister Ramush Haradinaj imposed 100 percent tariffs on imported products from Serbia and Bosnia and Herzegovina.

Kosovo Prime Minister Albin Kurti on Friday announced a proposal to gradually abolish the 100% tariffs introduced in November 2018 on products from Serbia and Bosnia and Herzegovina, as a countermeasure on Serbia's campaign to withdraw recognition of Kosovo's independence.

US officials, however, urges the so-called Kosovo to unconditionally abolish customs duties introduced in November 2018 on Serbian goods, while Belgrade is urged to end its campaign of derecognition of Kosovo's independence.

In less than a month, the United States secured two agreements between the parties to establish an airline, a railroad, and build a highway between the two countries.

According to Tanjug news agency, besides Vucic and Thaci, the meeting was attended by the US President Donald Trump's special envoy to Belgrade and Pristina Richard Grenell and Trump's security advisor Robert O'Brien.

The agency said all four agreed on the necessity of the removal of taxes and said they wished that Belgrade – Pristina dialogue on the normalisation of relations resumed immediately after the tariffs were revoked.

Earlier on Monday Vucic said his meeting with the State Secretary Mike Pompeo was sincere and meaningful and that he was grateful to the US officials for listening to Belgrade and understanding its problems, the Beta news agency reported.

“I’m grateful to all American officials for their clear view. I have said several times that with some in the international community, you never know what they think, while with the Americans, you know everything. I’m aware that we have a different opinion about Kosovo, but thank them for listening to Serbia and understanding our problems,” Vucic told reporters after the talks with Pompeo.

"Then I listened on the other side about how important it was. I said no problem, but for that, all the time I asked the Albanians only one thing, and I said it 500 times in Brussels: 'People, you don't run for different international organizations and institutions, do not force us to engage all our capacities, let us not, as we speak, go for additional recognitions and additional nominations to Interpol, UNESCO, to all other international organizations and institutions, so to agree on we will stop it, at least temporarily", Vucic said.

But, he stated, they never wanted it because they would immediately ask "who are we to prevent the meaning of their existence from lobbying for these international organizations and institutions". "They never wanted an agreement on the matter. That is the essence, that without such an agreement Serbia cannot agree to it," Vucic said.