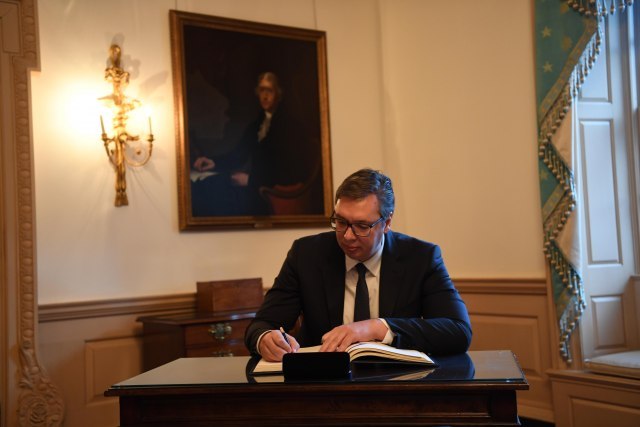 Vucic told reporters that Serbia would suspend diplomatic action to withdraw recognition of Kosovo's independence if and when Albanians stop demanding that Serbia recognize Kosovo.

"Don't ask for recognition, we will not carry out derecognition process. But they never wanted to accept it", Vucic said, adding that Pristina believes Serbia's diplomatic action to persuade the countries that recognized Kosovo to withdraw recognition "harms their position as an independent country".

"If they find this insulting for their position, how come that they ask from us to disrupt what they are doing every day?" Vucic asked, adding that we would continue to have such minor or major successful diplomatic activities.

He reiterated that Serbia is ready for dialogue resumption if Pristina lifts tariffs.

"When Albanians withdraw their taxes, we are ready to talk about the essentials," Vucic told reporters in Washington.

He said it was important to see what direction Richard Grenell and Robert O'Brien, United States National Security Advisor, were considering.

Vucic also said that the United States did not ask for any concession from Serbia in exchange for abolishing Pristina's fees.

The president did not rule out the possibility that he would meet with the president of Interim Pristina institutions, Hashim Thaci, during his visit to Washington, but that meeting has not yet been agreed.

As for Serbia's possible concessions in exchange for the abolition of fees, such requests, he said, were not mentioned in Washington.

America says, unambiguously and clearly, that the first and only thing Albanians have to do at this point is to abolish fees.

If the tariffs are lifted, then we can discuss further dialogue, i.e. in what format the dialogue will be continued and on what topics, he emphasizes and adds that at this moment the talks between Belgrade and Pristina can be conducted only on issues that are not essential, i.e. excluding status issues.

"We can only discuss something that is essential when the fees are abolished", Vucic emphasized.

Vucic did not rule out an opportunity to meet Thaci, but said he had no specific topic to discuss with him.

He is waiting, he said, to see what the hosts of that meeting will say first.

He will also discuss the matter with German Chancellor Merkel in a few days.

"So, what is important is that the dialogue continues to try to lower tensions, not to underestimate one another, because there are no winners here, we have to live side by side for the next hundred years", president said.

Asked if he thought there would be any specific issues raised during the meeting with Thaci, Vucic replied: "I do not think so".