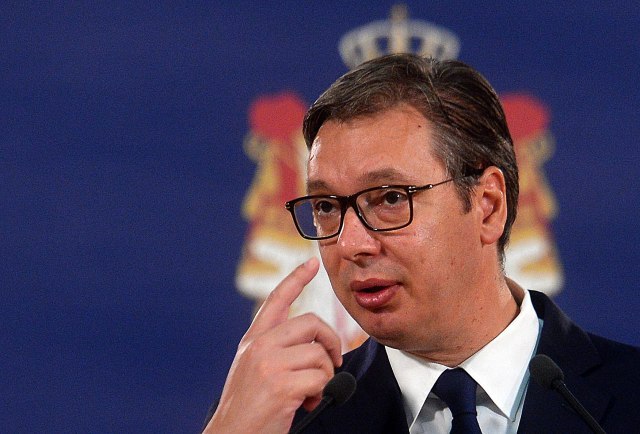 "I understand rejoice, in a way a kind of satisfaction due to the fact that Ramush Haradinaj was summoned by the court. However, there is no reason to get excited about it. We will assess all the facts and consequences of this act, in particular with regards to the relations between Serbs and Albanians, and the attitude of the international community towards Serbia and its people on Kosovo and Metohija."

Serbia will react with maturity and composure, Serbia's President concluded, despite open hatred shown on the part of the Albanians towards Serbia which they regard as the main culprit, while the resumption of dialogue is crucial.

"We envisage that they will release him in 48 hours. I have no doubt about it, he will return as a great Albanian hero, reaching the peak of his popularity", Vucic pointed out.

He also said that the imposed tariffs on Serbian goods will not be abolished and that western countries will pressure Serbia stronger under the pretense that they summoned Kosovo leaders to the Hague. He deems that Serbia will be pressured to recognize Kosovo’s independence and that “people in Serbia should be fully aware of that.”

"Serbia will continue to insist on dialogue resumption, and as tariffs will not be lifted, we'll discuss Balkan economic unity with the leaders in the region", Serbian President announced.

“At the same time, there is silence about the crimes against the Serb and non-Albanians, they keep quiet about that, speaking only about its political implications,” he emphasized.

According to Vucic, continuation of Belgrade-Pristina dialogue on stabilization of the relations is crucial for the peace and stability. “But, we are afraid that political developments in Kosovo will be further delayed and dialogue postponed. Haradinaj will go to The Hague next week, only to be released in 48 hours, so that he could return as a great hero of the Albanian people”, Vucic concluded.

In the meantime, Serbian President reiterated, creating a majority without the Serb List will become a priority, prior to the next Kosovo elections.

Vucic met with Serbian member of the BiH Presidency Milorad Dodik and his associates on Friday night, immediately after the news on Haradinaj's resignation.

The meeting was attended by Defense Minister Aleksandar Vulin, Minister of Internal Affairs Nebojsa Stefanovic, Director of the Office for Kosovo and Metohija Marko Djuric and General Secretary of the President of Serbia, Nikola Selakovic.