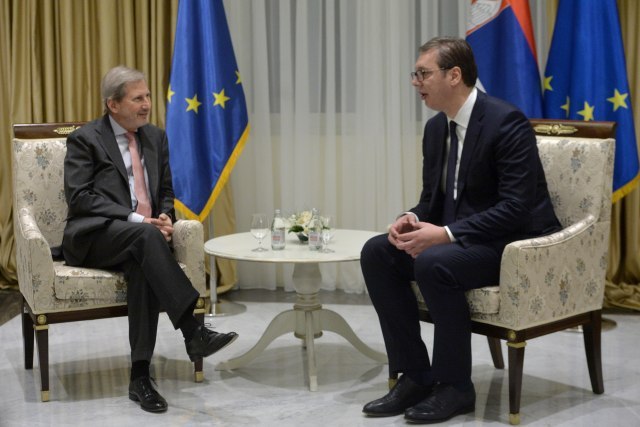 They discussed Serbia's European integration, the situation in the region and the problems in the dialogue with Pristina.

The EU commissioner "insisted on progress in the field of democracy and the rule of law for the benefit of society and the movement of Serbia on its European path."

Vucic "emphasized that Serbia respects the highest democratic principles and will behave in accordance with the behavior of Germany, France and other countries of the European Union when it comes to key issues in the area of ​​the rule of law, and the work of the police and judicial authorities."

On the eve of Hahn's visit here the European Commission announced he would repeat the necessity of inter-party dialogue and advancement in the field of democracy and the rule of law for the benefit of society and the movement of Serbia on its European path.

Before their meeting Hahn and Vucic attended a ceremonial ceremony declaring Hahn a new ambassador of the Youth Sports Games.

On Friday, Hah will, together with Vucic and PM Brnabic visit the restored Golubac Fortress downstream from Belgrade on the Danube.

The EU was one of the main donors in the reconstruction of the fortress, which is one of the most impressive gems of Serbia's cultural heritage.

Hahn came to Serbia after visiting Bosnia-Herzegovina, where he met with officials and civil society representatives in Sarajevo, to discuss "the reforms necessary for Bosnia-Herzegovina's progress on the path of European integration."