PM Ana Brnabic, accompanied by cabinet ministers, laid a wreath in the government yard today, where Zoran Djindjic was shot dead 16 years ago. 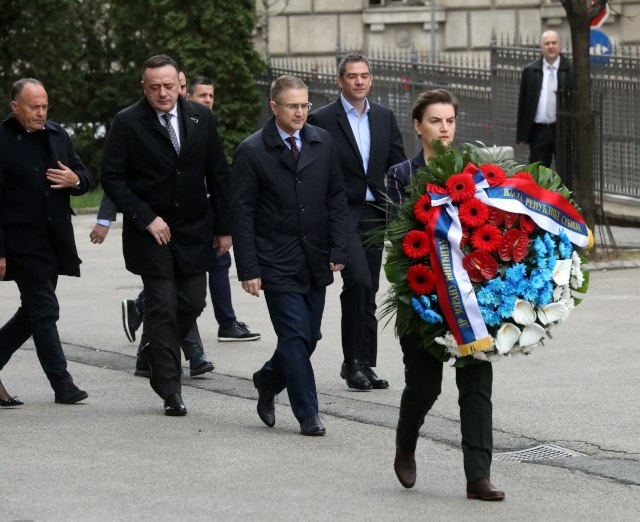 Djindjic, a serving prime minister, was assassinated on March 12, 2003, in front of the Serbian government's entrance to Nemanjina Street in Belgrade, the government noted on its website.

Beta agency is reporting that representatives of the Democratic Party and friends and sympathizers laid another wreath along with flowers on Zoran Djindjic's grave at the Novo Groblje cemetery in Belgrade. Wreaths and flowers were also placed on his grave by members and supporters of the New Party headed by party leader and former senior official of the Democratic Party, Zoran Zivkovic.

Around 150 people participated in a March for Zoran organized by the Liberal Democratic Party from the party's headquarters to the government seat, where they laid wreaths and flowers on the spot where Djindjic was assassinated. After that, a column of friends and admirers of the late prime minister continued the march to Novo Groblje cemetery.

In Belgrade, late on March 12, several thousand people participated in a memorial march dedicated to Djindjic which was organized by the Democratic Party and the organizers of the One of the Five Million protest.

Citizens quietly marched from the Faculty of Philosophy in Belgrade to the Belgrade government headquarters, with a large banner at the front of the column quoting Djindjic "If we do not succeed today, the only reason is we ourselves." The march saw all of the party's former officials participate.

Zoran Djindjic, the first Serbian prime minister after the ouster of the Slobodan Milosevic regime in 2000, was shot and killed on March 12, 2003 outside the back entrance to the Serbian government building. The political backdrop to the shooting was never clarified, the agency said in its report.