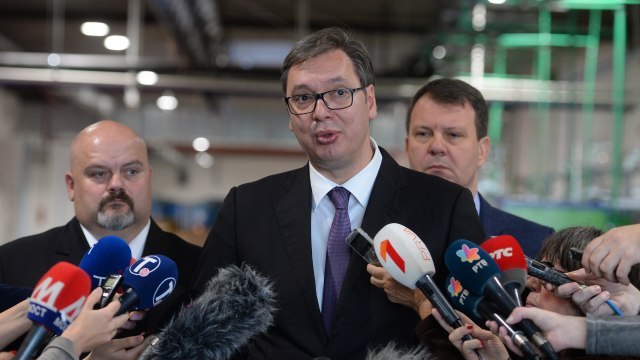 Asked by a journalist about Haradinaj's claim he is ready to recognize Kosovo in exchange for a part of its territory, Vucic asked "what he should say at all, and whether he had any need to deny these allegations made in the text, which has no particular weight, except to insinuate something about the relationship between Serbia and Russia."

"I have better things to do. They mention the Russians every time they attack Serbia. We are proud of our friendship with Russia. Only thing is, I don't know why Hashim Thaci was running after Vladimir Putin in Paris, and elsewhere," Vucic said.

The president added that it would be "good if they agreed on what their stance towards Russia is."

He also said that our stance towards the United States is "crystal clear," and underlined that he was "confident that any compromise would be the best solution."

"They are not even ready to withdraw the (100%) taxes, they say they will not give up statehood and sovereignty at any price, which means that the negotiations are ad acta (filed). They will talk about their sovereignty, we about our rights. We will continue like that for a few years, instead of looking to the future," Vucic said in a critical tone.

He added it made no sense to talk about "the capabilities of Haradinaj's adviser to write that letter." According to Vucic, the article's purpose was to demonstrate the connection between the Serbs and the Russians to the American public - and not much more.

"I don't care about the internal strife and the good cop-bad cop game," he stressed, possibly referring to Pristina politics.