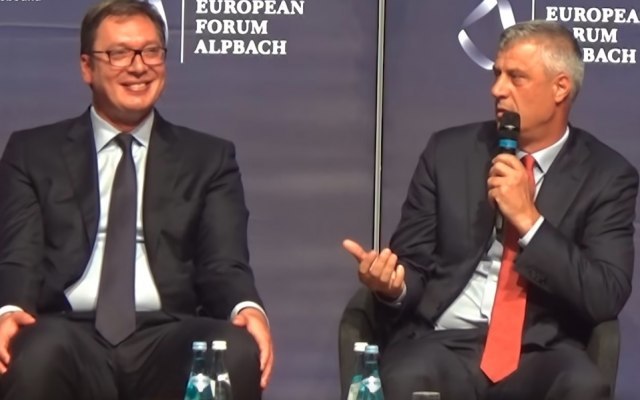 In some interpretations, a synonym was used - "drag out" - all while referring to the deadline for reaching an agreement between Belgrade and Pristina.

After assuming the office of president of Serbia, Aleksandar Vucic announced that his main goal was to solve the "Kosovo knot." In this light, talks under the auspices of Brussels had been intensified, and in recent months things seemed to have entered the "home stretch. "

The Serbian leader even announced his "first big address to the people" - but then the latter events, at least as far as the masses can see, moved the negotiating sides farther apart and brought the situation almost to a deadlock.

The main negotiators, the two presidents - Vucic and Hashim Thaci - in a number of media appearances spoke in favor of a solution hidden somewhere between "delimitation," "land swap," something else...

This idea was met in Belgrade with divided reactions, so political figures close to Vucic started wholeheartedly offering their support, while parts of the opposition, primarily the People's Party (NS), and then the newly formed Alliance for Serbia, remained of the view that it would be a step towards the final separation of Kosovo and Metohija from central Serbia.

A part of the Serbian Orthodox Church was also significantly and loudly involved in the polemic, above all the eparchy of the Diocese of Raska and Prizren.

On the other hand, the president of the self-proclaimed state and the chief of the provisional institutions in Pristina faced a significantly greater resistance to this plan. However, as things stand now, it seems that this resistance was unnecessary.

Paradoxically, a voice from Berlin that "there will be no border changes" seemingly put an end to idea championed by Vucic and Thaci.

Some new voices from Berlin, not only unofficial and "from diplomatic sources," have been reported by the Serbian media, stating that there had been some corrections in the position of the leading EU country.

"From the largest European centers, Berlin and Paris, the pressure to put an end to the matter is no longer as fierce as it had been several months ago. It is becoming apparent that an agreement is not even in sight, and these messages have reached top Serbian state officials. Aleksandar Vucic has been told in several meetings that he can drag out with Kosovo (solution) for a few more years," Blic said.

Indications that the "Kosovo knot" is on some kind of "stand-by" also came from the president's surroundings and his ruling SNS party, who are saying that "Brussels (where the negotiations are taking place) will have to wait for him" - and now it is uncertain whether and when a new round of the Vucic-Thaci talks, with the mediation of EU foreign policy chief Federica Mogherini, might take place.

The previous one was a fiasco.

Meanwhile, Belgrade officials are pointing out to an alleged "change in the US stance" and the intention to allow the negotiating parties to reach a solution that is acceptable to both sides. However, US ambassador in Kosovo and Metohija Greg Delawie recently pointed out that one cannot expect quite everything that is agreed by the two sides, if agreement is possible at all, to be accepted.

Until then, as things stand, the Kosovo topic is going to the background, while a new one is already emerging - who will next year replace Vucic at the helm of his party. Some media claim that at the heart of this idea is the intention of Vucic to, as a non-partisan president, go come before the citizens of Serbia and call a referendum that would decide the future of Kosovo and Metohija.

However, one should bear in mind that the current administration in Brussels is at the end of its mandate and that 2019 will see elections for the European Parliament, when anything could happen - in light of the strengthening of nationalist awareness, the growth of Euro-skepticism and the decline of Euro-fanaticism in many large member-states.

Vucic, too, recently pointed out that "there are fears" when it comes to the rise of right-wing parties and movements in the European community, which he linked to possible difficulties in untangling the "Kosovo knot."

European elections will be held in May, and by then - we will wait to see and hear what this "drawing out" means. For now, obviously, things remain as they are - such that no one, probably not even the main actors, can be quite sure of the possible outcome.