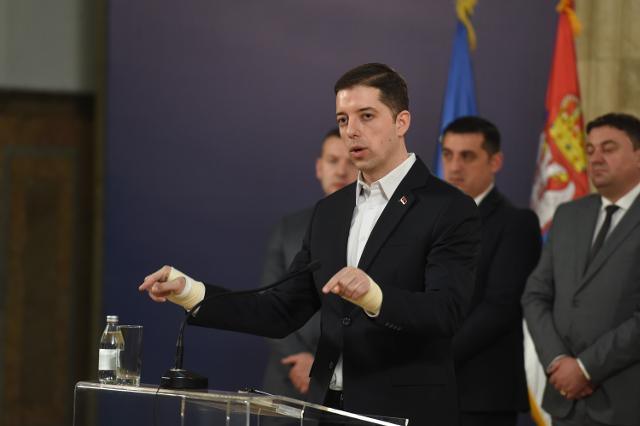 The head of the Serbian Government's Office for Kosovo and Metohija, who spoke publicly for the first time after his arrested in Kosovo on Monday for allegedly entering the territory illegally, said he was proud of the Serb people, who "defended themselves using Gandhi's methods."

"To me those are not police officers," he said of the members of Kosovo police who arrested him. "That's a raging terrorist gang. They were sent against unarmed people. That's disgraceful for them, and for those who kept silent and in that way agreed to it."

Djuric also described members of Kosovo police as "an armed falange" rather than official persons, and stressed that he was "dragged like a dog" as attempts were made to humiliate him, Serbia, and the Serb nation.

"They put me in a transporter (vehicle), struck me, attempted to intimidate me, pushed a rifle against my stomach, one of them took out a knife, they took selfies. On the way to Pristina (from Kosovska Mitrovica) they chanted 'Allahu Akbar'," Djuric recounted his ordeal, adding that although he is experiencing pain, he feels good.

"If there weren't for one call from Belgrade, the violence and the terror against the Serbs would have continued," the official said, but would not reveal what call he had in mind.

Djuric also said Pristina lied that his trip to Kosovo was unannounced, saying this was done the first time 70 hours ahead of the planned gathering in Kosovska Mitrovica, and then several more time.

Before he addressed reporters today, Djuric, his arms in bandages, attended a meeting with representatives of the Serb List, along with President Aleksandar Vucic.

The meeting behind closed doors was dedicated to Belgrade's next moves, and those of the Serb List, which announced afterwards it would leave the Kosovo government, and then form the Community of Serb Municipalities on its own.

On Monday, Kosovo police stormed the Mitrovacki Dvor venue in northern Kosovska Mitrovica, arresting Djuric and later transporting him to Pristina where he was taken before a misdemeanor judge and then "deported" to central Serbia.

Kosovo police used stun grenades and tear gas during the arrest, leaving several citizens inside and in front of the Mitrovacki Dvor injured.

scroll down for images of an email exchange between Belgrade and Pristina, announcing Djuric's trip to Kosovo: