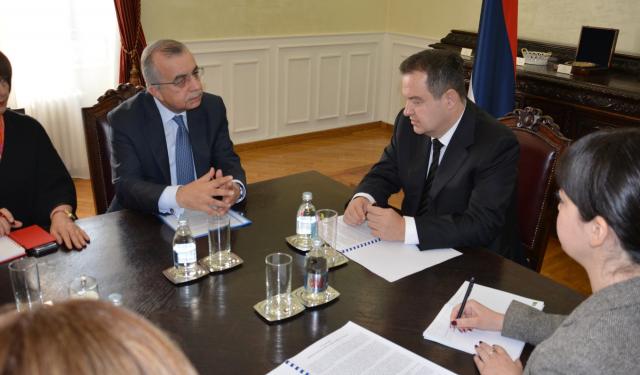 Tanin is in Belgrade as part of his regular visit to Belgrade ahead of the upcoming UN Security Council session on the work of UNMIK, the Serbian government announced, citing a statement from the Ministry of Foreign Affairs.

Dacic spoke with Tanin about "the current sensitive security and political situation in Kosovo and Metohija, especially after the tragic murder of Oliver Ivanovic, as well as on current events regarding the attempt to abolish the Special Court for KLA crimes.""

The topics of discussion also included the perspective of the Belgrade-Pristina dialogue and the engagement of UNMIK.

"The importance of further uninterrupted presence and operation of this mission in order to create the conditions for the normal and dignified life of Serbs and members of other non-Albanian communities in Kosovo and Metohija" was pointed out during the meeting.

Dacic "stressed that the preservation of the current dynamics and format of the UN Security Council meetings on this issue is of great importance for the Republic of Serbia, especially in the context of efforts to build confidence and stability.""

He expressed his special gratitude for the efforts made to implement the mandate of UNMIK, as well as the expectation that the mission will continue its implementation in the forthcoming period in accordance with UN Security Council Resolution 1244 (1999), the statement said.