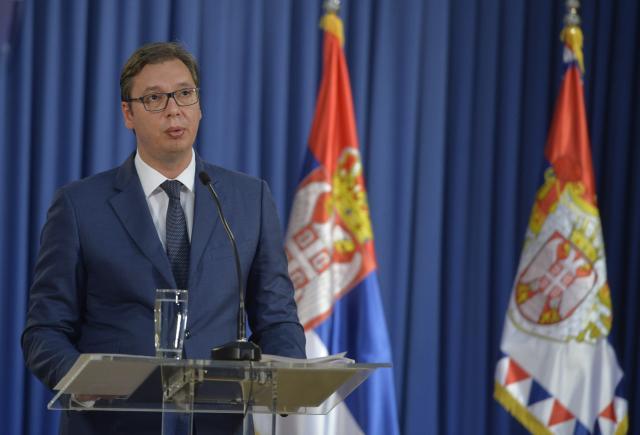 Vucic is seen during the news conference on Thursday (Tanjug)

President Aleksandar Vucic announced this during a news conference in Belgrade, held on Thursday afternoon.

He added that the SPS leader, currently Acting PM and Foreign Minister Ivica Dacic, "will essentially head the political portion," while Brnabic will deal with economic issues, "digitization and the like."

Vucic said there will be some changes in the cabinet, that will be revealed during the weekend, and that "one or two" new ministries will be created, Tanjug is reporting.

Asked what Brnabic said to him when he told her about the decision, Vucic replied, "I have no idea, 'thank you', I guess, some courtesy like that."

The president also revealed that she "brought him a gift from her trip."

Vucic said that Brnabic informed him she can secure a majority in the National Assembly to vote in her government.

According to him, Brnabic is "hard working, and has professional and personal qualities." Vucic is convinced she will "show respect toward those parties she expects to support her, and work on Serbia's betterment."

Vucic said that the decision was not an easy one, and "does not represent defeat" of his own party, the SNS, "or of anyone else."

The idea was to find the best solution, he said, and added that Dacic's SPS "will have a more significant role in the government."

"That was my desire, Ivica Dacic enjoys my full confidence," Vucic stressed.