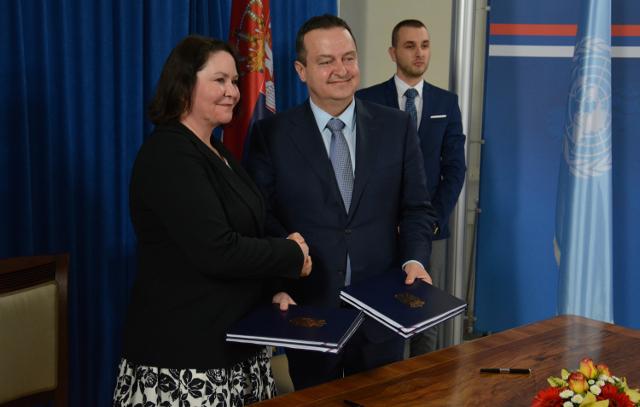 It presents "a comprehensive basis for the cooperation and assistance of the United Nations system, including 19 agencies, funds and programs of the United Nations, which is aimed at encouraging and improving the overall economic, social and environmental development of Serbia," the Serbian government announced, citing a statement issued by the Ministry of Foreign Affairs.

The Development Partnership Framework is "fully aligned with the national development priorities of the Serbian government, as well as with the process of pre-accession negotiations between Serbia and the European Union and the UN Agenda for sustainable development by 2030."

The estimated value of the program of activities for a five-year period covered by the Development Partnership Framework amounts to USD 170 million.

With its five pillars and nine outcomes to be achieved by 2020, the Development Partnership Framework is a kind of road map for the further promotion of good governance and the rule of law, social development and human resources, economic development, growth and employment.

It also included the protection of the environment, combating climate change and building resilient communities, and integrating culture into the overall process of sustainable development.

At the signing ceremony, both sides said they expected the framework to give a new impetus to the joint efforts to further promote cooperation between Serbia and the UN system.

Dacic "expressed his gratitude to the UN Team, with Resident Coordinator Karla Robin Hershey at its head, on the persistent and dedicated work on the Development Partnership Framework."

Dacic said he hoped that through the joint work of Serbian ministries, offices and agencies of the UN system, the Development Partnership Framework will be successfully put into practice, in the interest of all citizens of Serbia.