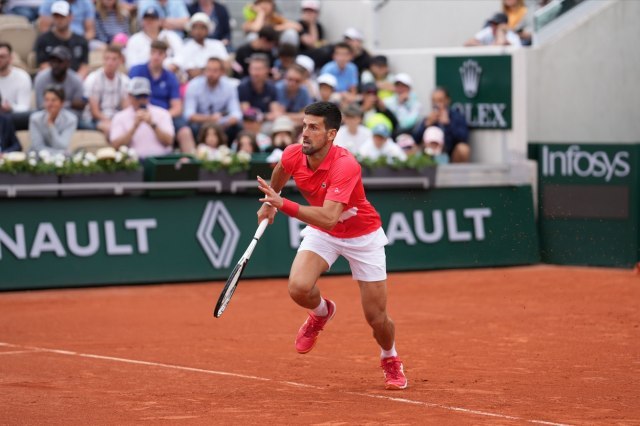 After the match, he was satisfied at the press conference, primarily with his game in key moments against the Slovak, whose new coach is Marian Vajda, a longtime member of Djokovic's professional staff.

Djokovic, who is coached by Goran Ivanisevic now, says that facing Molcan isn’t strange. But having Vajda coaching against him? It was rather weird.

“Molcan is for me an opponent just like anybody else, but on the other hand I have never had Marian on the opposing team. To be completely honest I don’t want to have to experience it now”.

The presence of Vajda in Molcan’s box is a fact that does not go unnoticed by Djokovic.

“I have written to Marian a couple of days ago, and we have seen each other today and yesterday,” he told Serbian reporters on Monday night in Paris. “When I saw the draw it really wasn’t easy. I don’t know how I will feel on the court.”

"So far, I am satisfied with how I feel, how I hit, under these conditions against a very awkward opponent. I knew it would not be an easy match, I calmed my nerves and played a tie-break, everything is going in the right direction and looking towards a new goal", Novak told media representatives in Paris.

In the next match, he will have Aljaz Bedene as his rival.

"I am playing against the right-hander next match, it is important for me," Novak said, adding:

"I don't expect an easy match, but I think I played quite well today. In the third set, I suffered a break, I allowed him to return to the duel. However, I kept my composure and played as I should in the tie-break. I am satisfied that I played in this way in the first two rounds of the competition. Everything is going in the right direction and I am facing new challenges," said Djokovic.