BELGRADE -- Chairman of the Commission for investigating murders of journalists, Veran Matić, spoke on the occasion of the discussion on the amendments to the Criminal Code

BELGRADE -- Chairman of the Commission for investigating murders of journalists, Veran Matić, spoke on the occasion of the discussion on the amendments to the Criminal Code 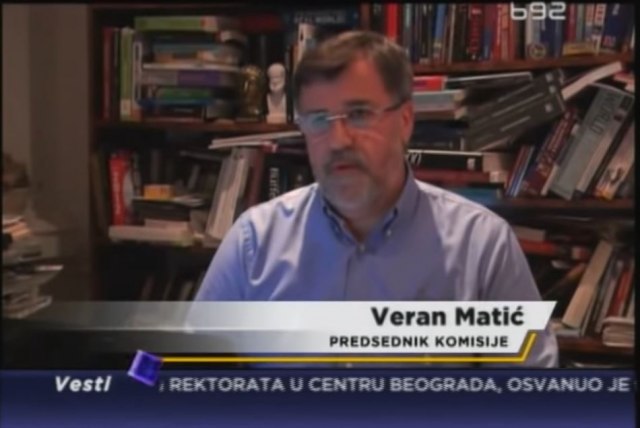 He said in a statement that he felt the need to make public some information important for the discussion and public debate on the amendments to the law, which have been problematized in recent days through various texts and interviews.

On that occasion, we are transmitting his statement in its entirety:

With this text, I do not want to enter into topics that go beyond the criminal-legal protection of the safety of journalists, nor do I have pretensions to be someone's lawyer. I notice that in the previous days, in the domain of what is in the sphere of my interest, there is speculation as to whether this is another ploy by the government and the state? Since I have been a direct witness to the emergence of the initiative and its implementation so far, I will try to arrange the facts chronologically in order to better understand the motives for the emergence of this proposal.

A permanent working group on the safety of journalists has existed for more than four years. It was created by the Agreement on Cooperation between the Republic Public Prosecutor's Office, the Ministry of the Interior and all relevant journalistic and media associations (NUNS, UNS, ANEM, NDNV, Local press, AOM and the Association of Media). A representative of the OSCE Mission to Serbia has been involved in the work of the Group since its inception.

One of the most important goals of this Group is to "establish a system of measures to ensure more effective criminal protection of journalists." Decisions are made by consensus. Documents on the work of the Permanent Working Group can be found on the portal www.bezbedninovinari.rs

During the work of this Working Group, among other things, a detailed Analysis of the Criminal Code was made and a Conclusion was reached on criminal acts that may be committed against journalists. This was very important considering that at the beginning it was considered that there were only three criminal acts. In the end, it was determined that there are as many as 35. Through the analysis of quarterly reports prepared by the Republic Public Prosecutor's Office, and the analysis of individual cases, we jointly concluded that court practice eliminates cases of endangering the safety of journalists, in a way that the perpetrators are released with the explanation that the conditions for the existence of any of the criminal offenses provided by the Criminal Code are not met, which is why the charges are rejected.

Thus, during 2020, the Action Plan of the Permanent Working Group was made, which envisages 11 activities, among which is the Analysis of potential changes to the Criminal Code in order to improve the protection of journalists. These activities also included those acts due to which journalists do not feel safe, while at the same time specifying or expanding the competencies of certain existing members.

All Permanent Working Group's members supported the proposal of the OSCE representative to hire the country's leading "criminal", law professor Zoran Stojanovic, with whom a joint meeting was organized, so that all Group members could present their views on the reasons for the Criminal Code changes and concrete ideas. Representatives of media and journalist associations also submitted problematic cases of unauthorized threats, as well as other forms of security threats known to them.

At the very beginning of this process, at the reasoned proposal of Professor Stojanović, it was concluded that the same mechanism should not be used as in the case of the protection of lawyers, which is protected by a special article of the Criminal Code. Namely, in the case of a lawyer, it is easy to establish who the lawyer is, since it is necessary to have passed the bar exam, while in the case of journalists it is impossible to use this type of positive discrimination in relation to other professions.

Professor Stojanović's first proposal was analyzed several times at the Permanent Working Group's meetings. The additional proposals of the media community were fully accepted, to the mutual satisfaction.

At the end of last year, Prime Minister of the Republic of Serbia, Ana Brnabić, established a Working Group for the Protection and Safety of Journalists. The idea was for it to be complementary to the Permanent Working Group, which, among other things, did not have the opportunity to constantly react with public statements when security threats occur. At the meeting of the Working Group for Protection and Safety of Journalists, a coordinated initiative to change the Criminal Code was presented to government representatives, introducing Professor Stojanovic's opinion on the possibilities of amending the Criminal Code, where the document could be taken as a starting point for further steps.

At this Working Group, the opinion of the professor was adopted as a good solution that should be put in the adoption procedure, without any changes by the government representatives in this body. When asked whether changes to the Criminal Code would be awaited to bring them in line with European standards (the deadline for these changes is the end of 2022), UNS and ANEM representatives suggested that the amendments be adopted earlier, as 12 months is a long period of time, bearing in mind that problems with endangering the safety of journalists are accumulating.

In that sense, it was suggested to the Ministry of Justice to start the process of adopting this proposal within the Ministry itself, in order to open a public debate and initiate further procedure through the government and the Assembly. During the public debate, the mentioned proposal was once again debated within the media community, relevant media and journalist associations, and then everything was repeated when, in addition to journalists, representatives of non-governmental organizations were invited. At these meetings, there were no new important proposals or objections to the proposed solutions.

About ten days ago, a campaign was launched against the mentioned changes, with implications that it is another attack on the freedom of speech, media and journalists. In the reactions so far, apart from criticism, there have been no new proposals and solutions. It seems that the prevailing conclusion is that such a Criminal Code should not be changed, although in that way the problems related to numerous threats to journalists would be solved, especially on social networks, websites, direct messages…

A few years ago, an analysis of threats in the public sphere was made at the state level in Sweden, and an Action Plan for combating hate speech, threats and violence against publicly elected officials, journalists and cultural workers was made. There are already experiences from the changes that have been made - from changes to the law, to a number of other activities in all spheres of society. In Norway, we also have an experimental example within the police, where a unit for preventive activities has been established.

I think it is important that we in Serbia do everything possible to reduce the threat to the safety of journalists and media workers, as well as all other participants in public life. It is obviously necessary to extend the time for public debate, in order to clarify all doubts, but also to open additional space for some new ideas that would improve the criminal-legal protection of the safety of journalists. That will be my proposal to the Ministry of Justice and the Government of the Republic of Serbia.