SKOPJE -- Arber Zaimi, a member of the Self-Determination Movement's presidency, says Albania should have consulted with Kosovo earlier on regional initiatives.

SKOPJE -- Arber Zaimi, a member of the Self-Determination Movement's presidency, says Albania should have consulted with Kosovo earlier on regional initiatives. 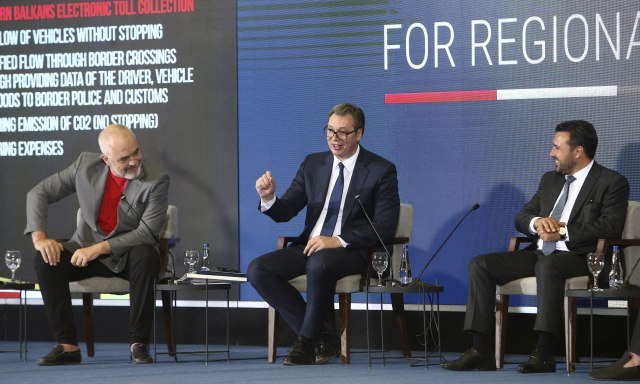 As he pointed out, something like that did not happen.

"If Rama thinks that it is in the interest of the region and Kosovo, then why doesn't he come to discuss it in advance with the leaders and the Prime Minister of Kosovo? He has three meetings during the year with Vucic, while we do not have any intergovernmental meeting or Rama-Kurti meeting", said Zaimi, as Reporters report.

According to him, Tirana is not dealing with the agreements it has with Kosovo in order to become operational, but "supports initiatives in the interest of Serbia."

Zaimi described the "Open Balkans" initiative as an "adventure" and as "blackmailing the EU to speed up European integration". He estimates that this initiative is in the economic interest of Serbia and that it comes at a time when Belgrade has other geostrategic interests, because "it closely cooperates with Russia and China and opposes NATO."

"Regional agreements must be discussed on a rational basis. I remind you that Serbia's trade agreement with the Eurasian Union countries based in Moscow entered into force on July 10. Serbia is a country that is not defined in geopolitics, while the Western Balkans are pro-European and pro-Western", said Zaimi.

Zaimi says that Serbia "needs to be pressured to change". According to him, Albania loses 120m euros a year from trade, while with Kosovo it gains 150m euros a year.

"Rama does not have the luxury of severing ties with Kosovo and regulating relations with Serbia," Zaimi concluded.