PARIS -- President of Serbia, Aleksandar Vučić, said that the main topic of the meeting with the President of France would be the issue of Kosovo and Metohija.

PARIS -- President of Serbia, Aleksandar Vučić, said that the main topic of the meeting with the President of France would be the issue of Kosovo and Metohija. 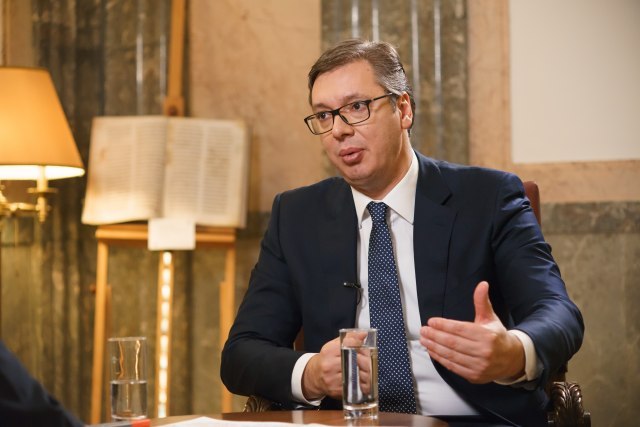 Vučić said that this will be the 11th meeting between him and the President of France, Emmanuel Macron.

"We will discuss many important things, this is our 11th meeting. Marcon is one of the most important world leaders and a sincere friend of Serbia, and his visit to Serbia in 2019 was of historical significance for our relations and since then, our political and economic cooperation have just an ascending level”, he noted.

"Tomorrow is the main topic of Kosovo and Metohija, then the European integration of Serbia," he announced.

Vučić said that France wants progress on the issue of Kosovo and Metohija by 2022, when it will take over the presidency of that union. "Having in mind the gravity of the situation we are facing in the entire Balkans, it is not easy at all, but I will be very honest and talk openly to Macron about it," Vucic announced.

Regarding the European integration of Serbia, Vučić pointed out that it is important to finally, on the basis of the proposal presented by France to the EC, which Serbia accepted, to apply the new methodology.

"To open more chapters, through the so-called clusters by June, and twice as many by December. But we must do important things in the area of the rule of law and progress through the economy," Vucic said.

When it comes to bilateral relations, Vučić reminded that the trade exchange between Serbia and France reached 1.2 billion in 2019, and would be, he says, even higher today, instead of falling by six percent in 11 months last year, due to the coronavirus pandemic.

About the elections in Kosovo and Metohija

Vučić said that what was happening in Montenegro in the previous days was unprecedented.

"I cannot believe that they kept them at the border because they had several Serbian tricolors, and they also had three laptops. I am ashamed to talk about the expulsion of Serbian citizens who have contracts with their employers, we must show that we are more responsible and not endanger Serbs there", he said. Speaking about the events in Kosovo and Metohija due to the local elections, Vučić warned of provocations in the north of that territory.

"There is now hysteria about the elections, because the victory of the coalition around Haradinaj is expected," he said.

He thanked the Serbs for their restrained reaction during the arrival of Albanian politicians in the north of Kosovo and Metohija and noted: "We must preserve peace."

"You came to the Serbs to humiliate them, insult them, and to tell the Serbs: this is not yours, this is ours. The Serbs abstained and the reaction was verbal, there was no physical violence, I want to commend them for their restraint. We must keep stability not because we are weaker, but becaus peace and stability suit us the most, because Serbia is going faster than ever. Neither regional nor world relations have changed so quickly. Our opportunity is to make greater growth now," Vucic said.

When asked about wiretapping incident, Vučić said that the competent authorities were doing their job concerning that particular issue.