BELGRADE -- Predsident Vucic stated, following the meeting with the owner of Channel 9, Maja Pavlovic that the state cannot resolve all the issues, promised prompt reaction

BELGRADE -- Predsident Vucic stated, following the meeting with the owner of Channel 9, Maja Pavlovic that the state cannot resolve all the issues, promised prompt reaction 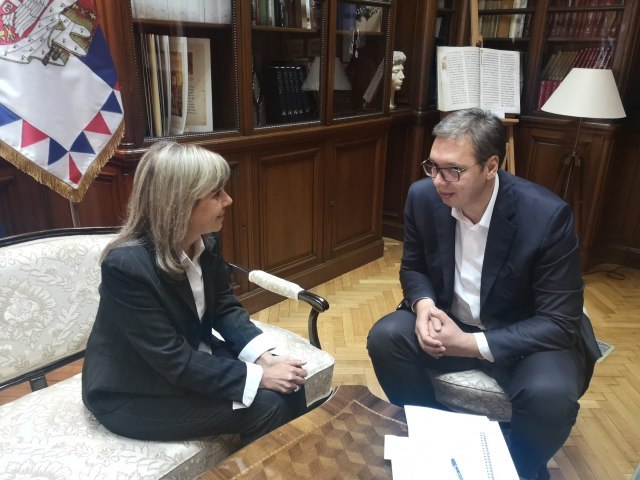 Vucic pointed out that he will actively engage himself in resolving this problem.

"I am aware that the situation is complicated, but we will try to solve the problem in line with relevant legislation and with putting much effort into it", Vucic said on the Instagram profile of the "Future of Serbia", along with publishing the photo from the meeting with Maja Pavlovic.

Vucic added that he listened to and fully understood the problems Channel 9 faces with.

Maja Pavlovic demanded that the regional media’s costs were adjusted to their income so that they could survive on the market.

As she said to the press, President Vucic gave her "firm guarantees" that he would contact the respective institutions within the next ten days to see how the TV problem could be solved.

Pavlovic also told the press in front of Presidency that she had a conversation with Veran Matic yesterday and that he told her that negotiations are already underway with the organization for copyright protection in order to adjust economic taxes to the payable ones.

She said that she conveyed to the president that she is afraid of stopping the strike and leaving for Novi Sad without concrete solutions.

"I received strong guarantees that it will be done in 10 days and that, if there is no progress, I should come here and continue with the strike", Pavlovic concluded.

When asked whether she stopped hunger strike, she said that she drank coffee with the President and that she will stop her third hunger strike today, as 10 days is not so long period of time for resolving outstanding issue.