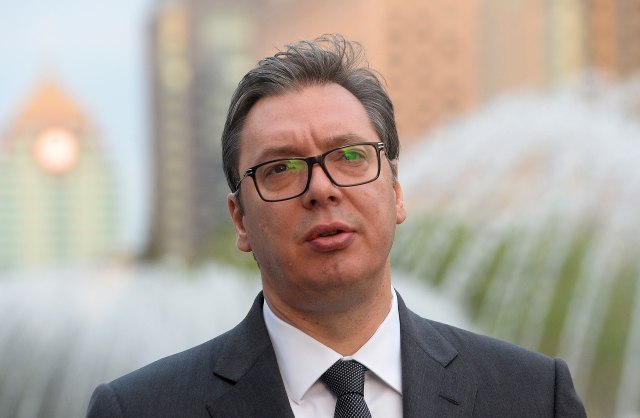 "It had nothing to do with Serbia, but with what Europe was offering them, just to accept the abolition of the taxes. They did not accept it because they came not as being the ones who decide, but instead with somebody having told them they must not accept that," Vucic said on Tuesday, a day after the meeting.

He added that the conflict between Ramush Haradinaj and Hashim Thaci was very visible during the meeting in Berlin.

Asked to comment on the New York Times reporting that the EU will have more trouble with the Haradinaj-Thaci in-fighting than with relations between Belgrade and Pristina, Vucic said that this "circus" was on display in Berlin for everyone to see, where Thaci and Haradinaj, "as soon as they took a step away from each other, spoke the worst of the other."

"I think that's part their clash, and part their double game, where they must always state different positions and opinions in order to win everybody over to their side, and get even more concessions from Europe and the world," Vucic said.

The position of Serbia does not depend on Pristina, but Pristina can do nothing without us, Vucic said, commenting on unrealistic behavior and ambitious demands of Pristina at the Berlin summit.

"Excuse me, what do you really want from Serbia? For Serbia to fulfill all your wishes, and to receive what? Your recognition? What do we need your recognition for," said the president, recounting to reporters a part of his dialogue with Thaci yesterday.

Asked to comment on Thaci's statement after the meeting last night that "partition of Kosovo and the Community of Serb Municipalities (ZSO) with executive powers were 'dead ideas'," Vucic remarked ironically: "If Thaci says so - Thaci knows everything."

He reiterated that Pristina's representatives yesterday spoke in this way - "that there will be no new RS, no ZSO with executive powers, no partition..."

"I asked them - did you come up with that yourselves, or did someone help you out?," Vucic said and added that he reminded Pristina's representatives of some facts they overlook:

"And, where are you recognized, and what would we need from you?," Vucic said he asked Pristina's representatives.

"I told them literally: 'you can never become anything, no kind of consolidated state, without Serbia. Instead of you begging us, you want us to beg you because we care about peace and stability, and because we are serious and responsible'," Vucic said, conveying a part of the conversation from last night's meeting.

He then repeated that he was surprised and asked them what they would do about it.

"Nothing, they look at the ceiling, what else can they do. And then, they walk outside and tell these heroic stories," Vucic remarked.

He emphasized that it was "necessary to behave responsibly, because for what I would have told them otherwise, using much harsher words, Serbs from Kosovo and Metohija would have paid the price."

"And I cannot do that. It's easy for me to deal with them, but it's not easy for those who need to live with them," Vucic underlined.

"We did not make any statements, nor talk about anything of the kind," Vucic said.

He added that all meetings he has had in Berlin, including with German MPs, are important, "because these people respect seriousness and responsibility."

"It is important that we behave in a civilized, decent, serious and responsible, statesman-like manner, and I think that we acted like that yesterday," Vucic said.

Asked why Haradinaj did not meet with EU foreign policy chief Federica Mogherini yesterday, but did with the US ambassador in Berlin, Vucic said that Thaci also went to the ambassador, and that this was "interesting" - but that he did not object, and that our delegation respected the hosts.

"We met also with Mogerini, we respect Merkel and Macron, and it's important that this respect is shown, because we are on the European path," Vucic said.