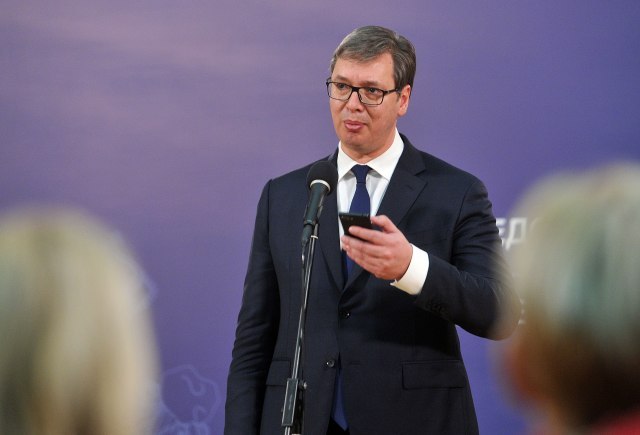 "It is clear to me that they will build on their plan. When they erase the border at the end of March, they will abolish taxes (on goods from) central Serbia and say they are ready to talk, but from a different position, of unified Kosovo and Albania," Vucic said in a statement to the press.

He explained that the Albanians will continue to work in stages and that this is something Belgrade has warned about in the past.

Vucic pointed out that "now people in the world are beginning to receive information about it - but I don't understand how someone is allowed to do this, because if we did a tenth of it, there would be stormy reactions."

"I see how bothersome a strong Serbia is. When I look at those people in Croatia, it's surreal what they write and talk about, it has nothing to do with reality. But you understand why they do it - because a strong Serbia doesn't suit some of them, they would like to see it weak, like it ha been until recently. There's no point in being angry about it," he explained.

He emphasized that "for us, the most important thing is to guarantee the safety and security of people at Kosovo and Metohija, that they receive wages and live in safety."

Vucic also said that the current situation creates great problems and that it is necessary for the authorities to deal with this and do their job, instead of concerning themselves with "(protest) marches."

Asked whether he had contacted world leaders about the activities of the Albanians, Vucic asked the director of the Kosovo and Metohija Office, Marko Djuric, whether he could "recall how much that had been pointed out to over the last few days alone."

"Whenever you call, you always get the same answer. Whoever we talk to from the big Western European policy, but also the overall Western policy, and tell them what our reaction will be, the reply is, 'We are really surprised, we did not see that last thing you are telling us. Thanks for informing us, we will react in accordance with our capabilities and capacities'. After that you usually get one big nothing," he said.

He said that he did not expect any reaction "anyway."

"Imagine if we were doing this with the RS (Serb entity in Bosnia-Herzegovina). The other day some people were saying that I was making war with Dodik against someone. When did I do that, other than not allow Serbia to be humiliated? Obviously for some people Serbia can never be as small as they fear her being a proud and normal country," he said.

The president stressed that "we will continue to protect our country, to fight for it and its future, and that of our children."

He also said he hoped there would be "more children in Serbia next year compared to this."

When a journalist of from Most TV thanked him for including journalists in Kosovo and Metohija in the Kosovo bonus payments, Vucic said that this was our state's obligation.

Kosovo Prime Minister Ramush Haradinaj announced on Facebook on Saturday that "from today, the border of Kosovo with Albania does not exist."

This was reported by the Pristina-based daily Zeri.

"Today, it was my honor to participate in the signing of an agreement establishing joint border points between Kosovo and Albania, according to the principle of IBM and our common European road," Haradinaj wrote on Facebook.